Likes On Twitter Are Killing Your Reach. Here’s How To Stop It

If you’ve read our blogs for a few years then you’ll know that I’ve always had a bee in my bonnet about favourites.

Update 1/12/15: Favourites are now called likes. The star was replaced with a heart but the function and my point here are exactly the same.

They’re kinda pointless and they’re kinda not. Favourites (now called Likes) do many things, and like most tools in life they’re only as good as the person using them. 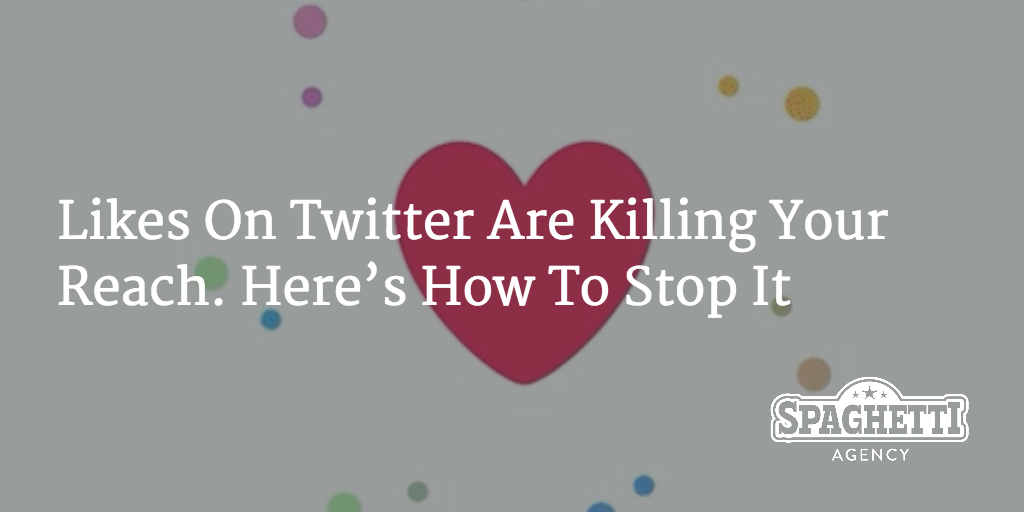 Likes On Twitter Are Killing Your Reach. Here’s How To Stop It

Your likess and lack of caring are killing your Twitter conversation

Here’s the deal with likes:

You have a choice.

However you look at them: a human being has made the like happen and we need to interact with those.

Ignoring human interaction on Twitter begs the question: “What the hell are you doing on there?!”

Let’s look at likes on Twitter from both sides

Side One: The liker

So, you’ve just had a really nice tweet sent to you and you have a choice. A choice to continue that conversation or you could kill it… with a like!

When someone tweets you and says:

“Hey – your stuff is really nice.”

Tweet back. Say thanks. Ask them why they said that. What did they find interesting or useful? Can you discuss it further? Get a conversation going.

Hitting ‘like’ not only says “I can’t be bothered to talk to you”, but you also miss the opportunity to speak to someone who clearly cares about something AND they’re prepared to talk about it on Twitter.

Yes, it’s more effort to talk to them… but then if you can’t be arsed then it begs the question once more “What the hell are you doing on there?!”

Side Two: The Liker

You’ve just sent out a tweet and someone likes it.

Damn it! No one will see that. It’s not a retweet and it doesn’t help anything other than vanity metrics.

But wait… a human did that (unless it’s a bot). A human clicked a button. It’s minimal, but it’s something. Something can lead to something else and before you know it, a conversation could start.

I read a book recently called Networking for Dummies and the line that struck me was:

“Everything starts from a little conversation.”

It’s so true… even huge deals start with little conversations.

So why not start one?

Whatever you do, try and harvest that small seed of interest. Someone has shown you some interest and although it’s small you never know how big it might grow.

This works by the way.

I do it all the time for my clients.

I NEVER ignore a like. I respond to them and check them out.

Twitter takes time and effort to make it work for you and your business. Follow up on every interaction.

Retweets are also worth following up on too.

When someone likes you, take that as an excuse to go and talk to them… as long as they’re not a bikini-clad top-heavy lovely just promoting dodgy websites!

At the beginning of this post I said that likes are killing the conversation… but they aren’t – your use of them might be!

Make a wise move and use them to find conversation. Stop using them instead of actual words.

Ignoring human interaction on Twitter begs the question: “What the hell are you doing on there?!”

What do you think? How do you use likes? Am I wrong? Let’s discuss it in the comments below.

12 comments on this article