How Long Until Someone in your Network Buys from you?

This week we’ve had a great reminder about nurturing the relationships in your existing network as well as building new ones.

We signed up a fabulous new client who has known us for a REALLY long time. You won’t believe how long it’s taken for this to come to fruition. This story may make you consider whether you need to play a longer game when it comes to your leads! 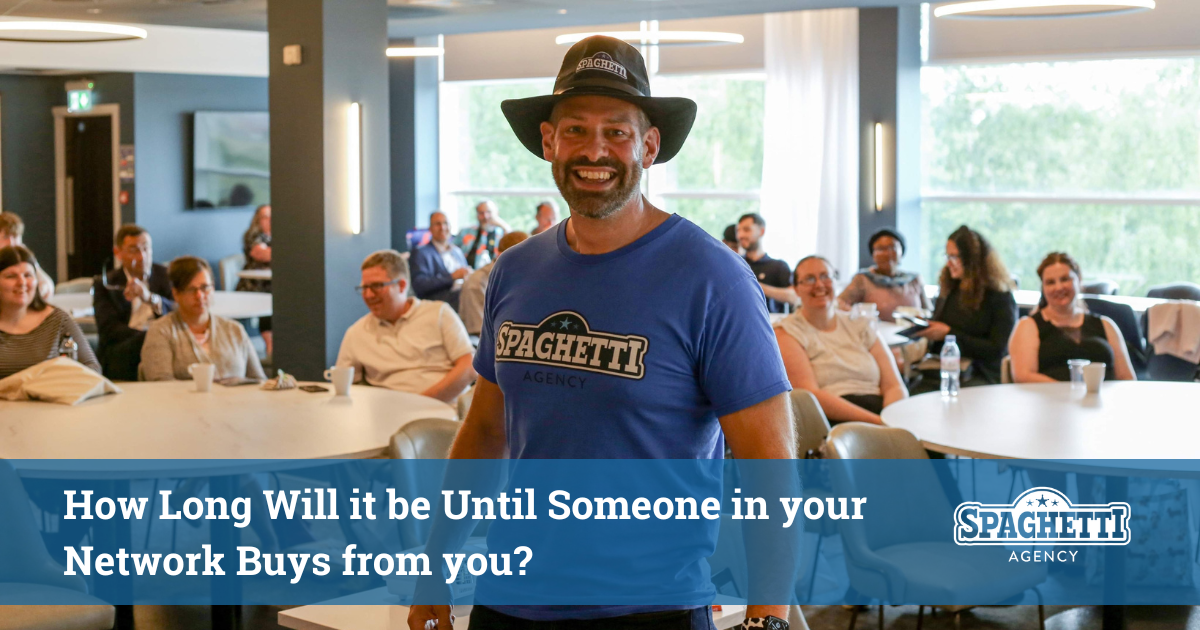 How Long Until Someone in your Network Buys from you?

It all began when Todd met Kay

In 1990 (yes, some of us were alive then) Todd started secondary school. As an 11-year-old boy he was far from a sturdy social media cowboy. He was more of a big-eared, shy little guy with a fondness for crew cuts (although we should probably blame the parents for that). BBC computers were the closest he got to websites. There were no mobile phones or streaming services. The only social media was all done in the playground or on the one house phone in the house which was in the hall. Phones weren’t even cordless back then.

Anyway, Todd was in the same class as Kay. Kay was clever, so not in many of Todd’s classes. (Note from the Editor – Todd is far smarter than he’s letting on. Don’t let him fool you!) Still, they were school friends for five years plus a bit at college before Todd left to get a job so he could buy CDs and checked shirts during the days of HMV and Burtons!

Then, after Facebook was created and Todd finally joined, Kay and Todd reconnected because that’s what we all did back then. Todd was driving a van, hadn’t met Jo, and all this Wild West marketing was a long way off. But, still, Todd shared things. He shared the updates from the Twitter years, he shared the ups and downs of his life, and, much like now, he shared waaaaaay too much. As an aside, you wouldn’t want to know what he’s been sharing in the ranch this week 😳

Anyway, back to the story. Kay (and all Todd’s other friends) saw the content and kept chatting with him. Todd keep posting content over the years and, eventually, people noticed him and then Spaghetti Agency.

Kay didn’t need us until recently. But, after a role change, she saw an opportunity to bring us in. She popped to see us at a recent expo. We chatted, we Zoomed, and, the other day, she said “Yes!”.

How long can it take for someone in your network to buy from you?

It’s taken 32 years for Kay to buy from us. Kay went from knowing Todd as a big-eared, shy kid, to someone who knew how to manage marketing for a decent-sized organisation. When she changed jobs and realised her new place needed some support, she instantly knew there was a project for Spaghetti Agency.

We’ve said it before and we’ll keep saying it.

We didn’t approach Kay; she approached us. This isn’t the first time someone from our past, who still follows us on social media, has got in touch and asked to work with us.

What’s the point of all this?

Did you know that only 3 million of the 830 million users on LinkedIn share content every week? This equates to 1% of the user count. However, the content from that 1% of users generates 9 billion impressions!

What’s the point we’re making? Those who post daily are there to share content with those who show up. Todd shows up. We show up. Our clients show up. People see it.

Are you sharing it often enough?
Or are you silently watching from afar?

If you want to be the type of person who posts daily on LinkedIn (or anywhere else) but you can’t find the time or don’t know how to get your ideas onto people’s timelines, please get in touch for a chat. We can do it for you!