If a Puddle Can Be Interesting, So Can Your Business.

“I can’t do what you’re suggesting with my marketing – my business just isn’t interesting enough.”

It wasn’t the first (and it won’t be the last) time I’d heard this. Training businesses to use social media to their advantage has always been a struggle because all businesses want to do is sell.

But social media isn’t about that, so they fail… and then they ask me for help.

My help involves many ideas: planning, strategies, tips, and tricks – but it’s often centred around storytelling.

“We don’t have an interesting story. We don’t understand how we would be interesting to other people.”

“Isn’t social media all about people sharing pictures of their breakfast?”

We all eat breakfast. We have that in common. And we all understand what breakfast is. It’s a simple conversation starter and conversation can lead to anything and everything.

If sharing pictures of food starts conversation, then so be it!

Periscope was launched into our world in 2015

The live streaming video app got the social media world in a spin and the Meerkat vs. Periscope battle was on.

Back in January there was a scope (a live broadcast) that not only got 20,000 people watching, but it also trended on Twitter, made it to The Guardian, and sparked a bidding war on eBay.

Was it something mind-blowingly amazing?

Nope. It was a puddle.

A puddle in Drummond, a northern town in Scotland. A puddle so popular that people sold samples of it on eBay afterwards and got silly bids from silly people… but it happened.

If a Puddle Can Be Interesting, So Can Your Business.

A puddle is more interesting than your business

This puddle was the most watched Periscope stream ever at the time and it trended on Twitter in the UK.

A puddle. A muddy, dark, wintry puddle near a road.

But that puddle had a story, and so does your business.

Around that puddle were many stories, journeys and adventures. People were involved and questions were unanswered. Why was the puddle there? Why did some jump the puddle and others walk around it? What possessed people to walk through it?

In your business you have a puddle.

Your business is the puddle actually.

Your business is a puddle and you have people, stories, events and backstories all around it.

People care about your story and they care why you came to be.

(They don’t care when you were established though… that’s just dull so don’t lead in with that.)

Your why; your reason for your business existing and the journey you’re on is important.

The Drummond puddle was important to the internet because it was easy to understand and then very easy to join in with.

Good stories involve many people outside of the story (or the business). A good story is involving and exciting… even one about a puddle.

That puddle was visited by surfers, lilo-carrying youths and health and safety triangles. That puddle is like your business.

Every day things happen and no matter how trivial you think they are they can form your story.

You story doesn’t just kick in when you win an award or you’re in the local rag. That’s a great part of your story but it’s just that – a part of it! 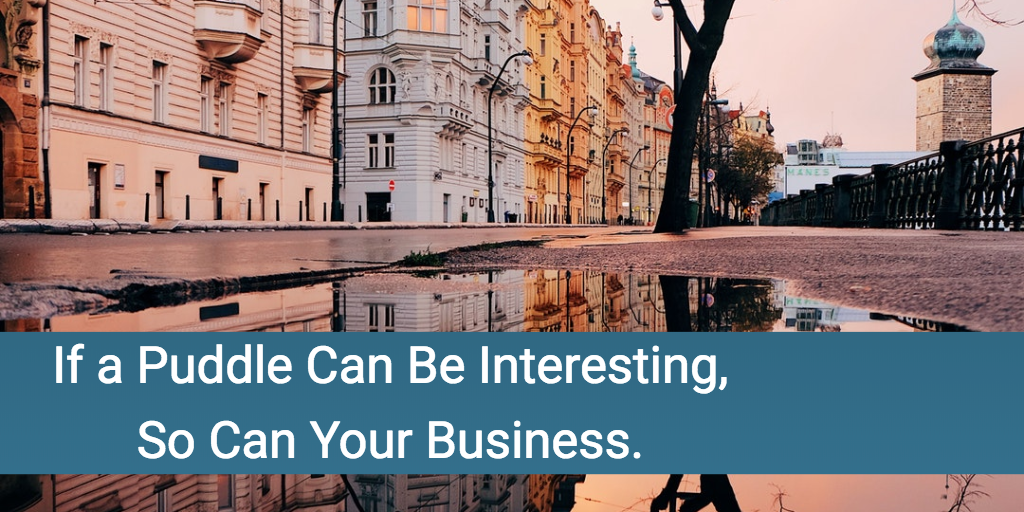 If a puddle can be interesting to 20,000 people, then so can your business

That puddle had a story, and so do you.

Tell your story and involve others in it.

Show behind the scenes. Share the ups and downs and tell the human stories behind it.

They show you behind the scenes.

They show you the story of the people and their world and we need that, we thrive for that; we have a thirst for knowing what’s happening.

A guy just placed a ‘slippery when wet’ sign in the Drummond puddle and it’s amazing #DrummondPuddleWatch pic.twitter.com/akjYHE0ZHV

Tell your story and give them something to remember you by…

Not everyone will be ready to buy from you today. Some of the connections on your Twitter stream, your blog, your website or at your networking meetings won’t need you for years, if ever.

But they’re always ready for a story.

Tell your story and keep them interested until they’re ready to buy from you.

Be memorable. Be interesting – be a puddle!

If a puddle can be interesting, then so can your business.