If You Don’t Want a Screenshot of it Published, Don’t Post it on Social Media…

Social media is engrained into our lives so much, it’s almost the norm for many. Sharing your life on social media, the highs, the lows and the unreal – it’s all in a day’s work to most.

But with that comes a few issues…

We’re very blasé about what we share, and often this results in not really thinking through the consequences of what we are sharing. I’m guilty of encouraging sharing content on social media, and I feel somewhat guilty about that when I see some of the content that’s shared in my close circles.

The rule I have about social media is this:

“If you’d be happy for a screenshot of your post to be blown up and turned into a poster in your local town, then press send. 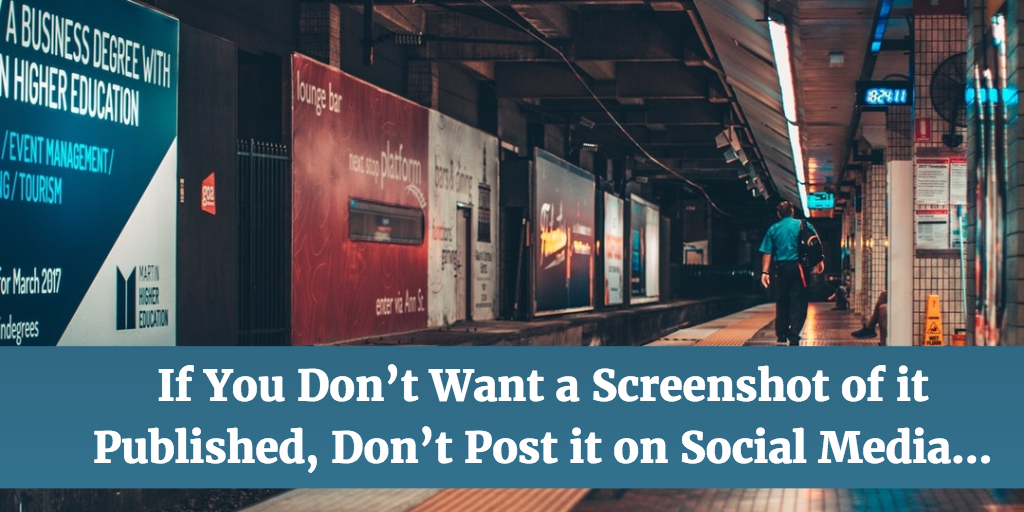 If You Don’t Want a Screenshot of it Published, Don’t Post it on Social Media…

Because the fact is: if it goes on social media, it could end up there!

Time and again I see content posted on social media that’s quickly regretted and then taken down… which is actually worse in many respects.

Trying to hide the evidence after it’s posted is futile in the ‘screenshot times’ of today. More often than not, if you’ve caused offence or sent something that in hindsight you really shouldn’t have, it’s already been screenshot for evidence by someone before you delete it.

Hopkins tweeted about the ‘alleged’ terrorist attack outside the National History Museum… only to hear later that it was in fact an RTA!

She of course back-tracked on her stupid tweets that encouraged tourists to avoid London as a choice of city, and deleted her content. Guess what? They were already screenshot and you can read them right here.

We’re also big supporters of local businesses, but that didn’t stop us recently when we had a rant about Hatton Shopping Village which is found inside Hatton Country World.

The service that Jo received was less than satisfactory, but the tweets and replies we got were nothing compared to the shit storm they created all by themselves with a recent Facebook post.

Don’t think it can ever be justified putting mum and tiny pups on public display let alone mum being tethered. Shame on you @HattonWorld pic.twitter.com/6xPx3xhU1S

Nell, one of their sheepdogs, had puppies over the weekend. Instead of sharing some cute pictures or an interesting update, the farm attraction well and truly ballsed it up! The photo of Nell tethered to a wall unable to tend to her puppies caused outrage locally and a social media backlash ensued.

The first response from the social team was to remove the photo and status… which angered people more and of course screenshots were taken, which can now be clearly seen in the local press.

They posted a new update to try to calm the social media backlash and then edited it later  IN CAPS! (lol). All those edits and re-posts definitely only made it worse.

Big brands are also very guilty of needing to ask for a second opinion before clicking share!

From auto-tweeting racism via the New England Patriots account to that time DiGiorno Pizza tried to brand jack the hashtag #WhyIStayed, only to find out it was about domestic abuse and not dating – there’s some real belters in here!

But just this week Dove did it again…

They obviously didn’t learn from their mistake in 2011 when they got a lot of hatred for the seemingly racist campaign. The simple ad showed a before and after scene, showing a black woman as the before and a white woman as the after, sparking a row that black women are dirty.

But they’ve done it again. Although it was taken out of context, a video clip from their recent campaign showed a black woman removing her top to reveal a white woman beneath. The full video did show a full mixture of race and colours but the internet bit back anyway!

The video was pulled by Dove’s marketing team but of course… it’s already been ripped and saved!

The lesson in all of this is “Think!”

Do you want what you’re about to share to be on your local town hall, skyscraper or your worst enemy’s timeline?

“Facebook gets a ‘non-exclusive, transferable, sub-licensable, royalty-free, worldwide license’ to your photos. Let’s break it down.

A ‘royalty-free worldwide license’ means Facebook is free to use your photos pretty much how they’d like anywhere in the world without paying you a penny or asking your permission.” – Source

So, in theory Facebook could use your photos too! (Sorry Hatton Country World!)

Look, I don’t want to scare you but please be careful what you hit send on. It’s very easy to be blasé with all this social media and content sharing. Think, think and think again before you post.

You really are just one screenshot away from a PR disaster, and that goes for your ‘private’ messages too!