I’m Too Scared To Be Social…

When I speak to people they often say:

or “What if people don’t like my business and use social media to tell people?”

It’s understandable that you might be concerned about social media. And it’s ok to be apprehensive about using it for business. But it’s not OK to ignore that fact that people will be talking about you anyway… whether you’re there to reply or not!

If you don’t do what you say you’re going to do, or if you give a bad service or product people WILL talk about it on social media.

We live in a connected world and for all the amazing opportunities that gives this also opens up the option to simply whinge and moan about things rather than pick up the phone.

It happens – and it’s terrible for restaurants and hotels at the mercy of Trip Advisor – but let’s stop ‘worrying’ about it and do something about it, shall we? 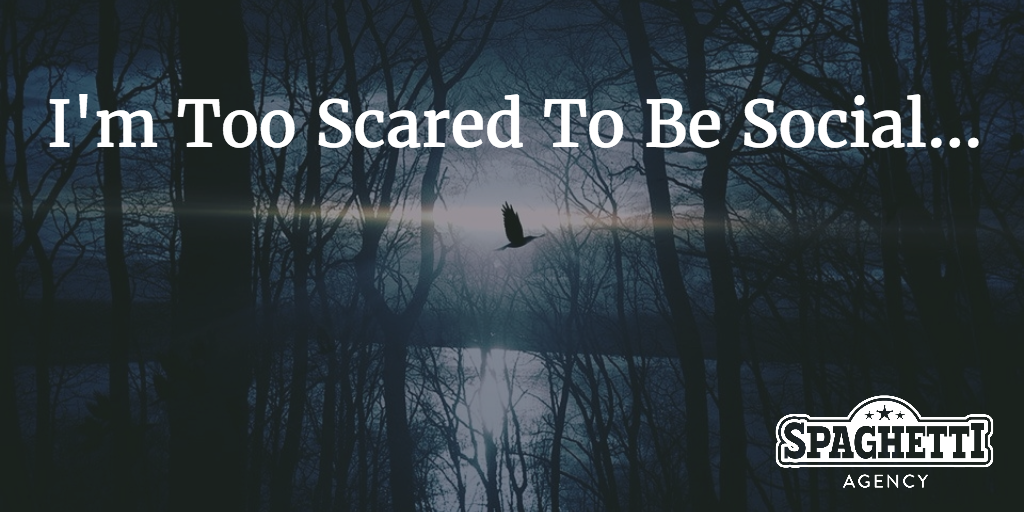 I’m Too Scared To Be Social…

Don’t be scared. Understand it – and have a voice!

As a human, you’re right to be concerned about something new. If you’ve never used social media for business then it will be a new frontier and something you should question. It’s just human nature, right?

But you have the chance to learn about it and get better at it. (You don’t have the choice to ignore it any more!)

The quicker you understand that it’s not a dark art and merely a different way of communicating, the better. Social media is one of the best ways to communicate with a brand or business. And yes, if you put yourself on there you will be contacted and you will be expected to reply.

Learn how social media works and put some real effort into getting better at it. It’s not going away and even if one day it does, the lessons you’ll learn about communicating with your customers will be extremely valuable.

When it goes wrong, it can go right

We recently had some very interesting insights from a Facebook Page we launched. A client of ours had a new product and we went loud with it through Facebook ads. Some of the comments on the post (which reached over 4 million people) were negative. Some sceptical people who hadn’t tried the product simply wanted to ridicule it and say bad things about it. Cheers for that!

But we didn’t hide. We stuck to our guns without firing.

… we weren’t trying to sell in the comments – we were re-marketing the product.

By replying and joining in with the conversation we learnt things about the product, the audience and our marketing.

The end result? A top-selling product and some very good relevance score from Facebook which led to cheaper adds and more reach for the ad money!

Being social and getting more and more engagement and turning angry people to positive ‘winking smilie’ people actually helped the campaign. But we had to go in, with our tin hat on, and do it!

SOCIAL media (clue’s in the title). Yes? The whole idea of going on social is to engage with people. Don’t be scared about this, just accept that this IS the way of the world now… and always has been.

How many times have you launched a product or service and without ever telling anyone and then sold some? Rarely? Never? You have to engage with people and talk to them. Without trying to just sell to everyone.

Social gives you a great platform to do this. Social gives you the perfect excuse to talk to people and yet I see many businesses failing to talk. The whole idea of social media is communicate – and yes you could argue that 99% of that conversation is rubbish – but from rubbish conversation comes interesting outcomes.

Engage with your audience on social media – you’ll be amazed at what you find.

Use social as social; not as a press release or statement

Please don’t make the mistake that a local page made recently. Without naming the page (those who know, know!), a local business came under fire recently on social media. The conversation wasn’t on their page; it was all over other timelines – but they were very much aware of it.

The news broke at the weekend (outside of the Monday – Friday 9-5) and the response came in later on Monday. (First mistake).

After all of the conversation on social media this post was very late to the game but they had a chance to engage and discuss matters… they just chose not to. People commented and they ignored it and it made them look worse than if they’d not posted at all.

If you’re going to use social, don’t be scared – engage! (That’s what it’s for!)

What if it does go wrong?

Do you know what? I had a bad experience recently. A service I had paid for went wrong. Through no fault of the supplier I was left embarrassed in front of my customers because of something out of my control and out of the control of my supplier.

How you perform when you’ve made a mistake can actually win you customers. How you respond when you’re under fire and in trouble can show your true colours.

When you look at this from a social media angle you can see how this would work… but on a grander scale. Only me and the supplier know about this issue but had it been on social media it would have been in front of so many eyes.

Maybe. But do it well and you’ll gain more customers through the respect and trust by demonstrating that you care, you can fix it, and that you’re able to listen and respond.

Communication is so important and demonstrating that you’re good at it is a powerful marketing message for you.

Look at Sainsbury’s for a great example of this. They chose not to ignore seemingly daft complaints and then go viral off the back of it.

Just read the ‘Bar cod’ conversation and many like it and you’ll see how they come out looking better than they would if they’d have ignored it.

I tried to buy some battered fish from @sainsburys but it didn’t have a bar cod!

Don’t be scared – be social!

Social media gives you the perfect excuse to talk to strangers, customers, and anyone who’s interested. Take the conversation off the streets and from behind closed doors and deal with it in the public domain.

Social media is a powerful tool and as I look at a recent Facebook Live that I broadcast that’s had well over 26,000 views and 600 shares I realise that just from my iPhone in a field I’ve affected so many people. I’ve affected more people than I will ever know or could ever meet in real life… unless I played Wembley Stadium! (There’s always hope.)

I wonder where it will end. What’s next? How will we connect with each other and our customers next?

Before you go online make sure you understand that social is just for making communications with your audience, customers, fans and followers.

And of course there’s one way to ensure that you don’t get wrath or bad comments on social media – don’t be a dick!

If you’re a bad company doing something unethical, then you’re obviously going to get some flack. But do you know what? Social can help you gain some positive PR if you approach it right. Show people how well you perform under pressure, go Live on Facebook and put a face to the organisation or write an open letter and RESPOND to the comments and show them who you really are.

Social doesn’t have to be scary… it can be truly exhilarating if you want it to be!

What scares you about social media? Add your thoughts in the comments below…