Hashtags on Facebook have been around for some time; since 2016, in fact:

“Hashtags turn topics and phrases into clickable links in posts on your profile or Page. When people click a hashtag or search for a hashtag, they’ll see results that contain the hashtag so they can learn more about topics that interest them.” – Facebook, 2016.

Do they work? Well, yes, ish… but it’s not that simple. Let’s look at the pros and cons of using hashtags on Facebook and see if there’s an argument for using them consistently or not. 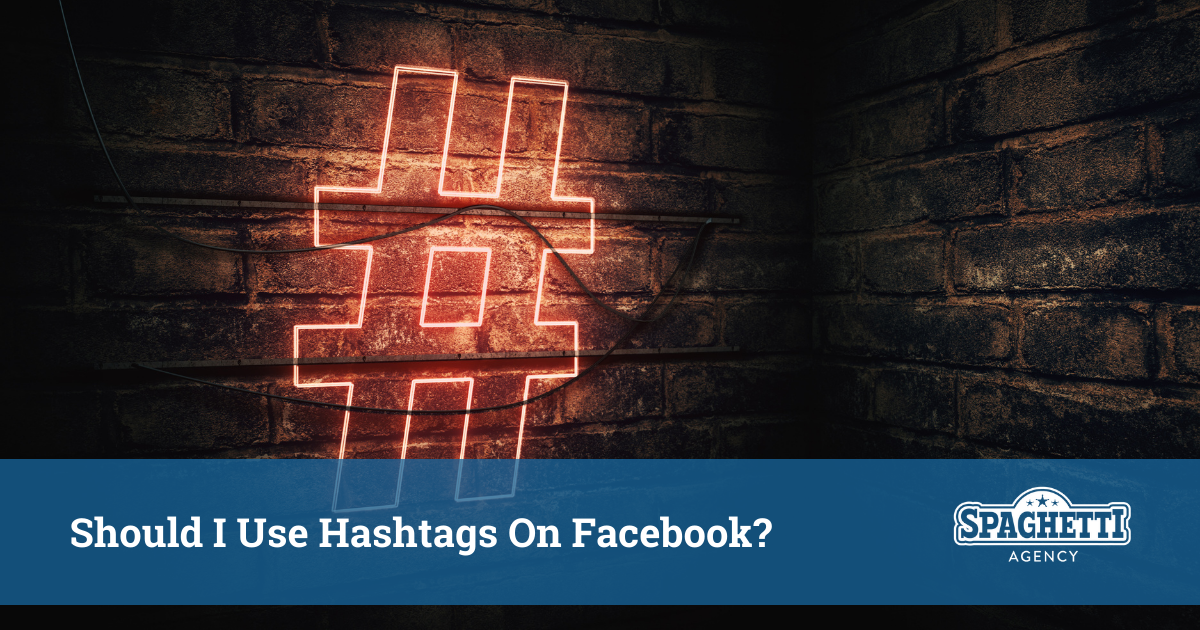 How did the spiky hashtag make it to Facebook? It was fine for years without them, after all. Twitter needs them like oxygen and most marketers on Instagram will argue until the sun comes down whether you need them in the comments, limited them to 15, or if you need a mix of small, medium, and large search volume hashtags.

But Facebook seemed largely unaffected by the hashtag. Until their introduction, it was fine without them. And then Facebook did what Facebook do best and stole someone else’s idea.

They were all the rage for a bit and then people stopped using them. Now they seem to be more prevalent thanks to the cross posting from Instagram. Now it’s very common to see 15+ hashtags on a Facebook post… because that’s how it rolls over on ‘The gram’ and the ‘copy and paste’ posting seems to create Instagram posts on Facebook.

Good for big brands (who already have a large reach)

From what we can see, hashtags are good for large brands. They have a great following and the hashtags created BY THEM lead to a whole new use of the hashtag because they’re initiating conversation. The press looks to them for content and loyal fans use the hashtags and there the conversation/hashtag conversation is created.

For most small business marketing it’s the direct opposite of this. You can’t create a hashtag and expect people to start using it and doing your marketing for you.

For example, SMEs will look to hashtags to gain a new audience for their content from hashtags that are already established and popular, whereas a large brand will push their audience to a hashtag and the media and social media users will pick it up from there.

Brands like Nike, McDonald’s and Apple will launch something big, put some big media budget behind it, and then slap a hashtag onto their content. That’s great. It works because people click on the hashtag and see the volumes of supporters using the same hashtag

So it’s handy for large brands, but not so easy for a small business or emerging brand.

Hashtags are good for linking topics

Even if you have a small following, you can create your own hashtag. I use #ToddsTips on YouTube and I continue this in our Facebook group, Spaghetti Besties.

Hashtags are perfect for linking up conversations in Facebook groups – here’s an example: #ToddsTips

Will that give you viral reach? No, it’s doubtful if you’re an SME, but it’s really useful for driving people to more of your content and organising your online stuff.

They don’t hurt your reach (not really)

Hashtags on Facebook won’t hurt you. A few here and there – posted without any real thought – are fairly pointless; but they don’t hurt. That said, there’s a lot of research to show that using too many will hurt your reach. Posting more than 2 or 3 is thought to be a bad idea.

The fact is most people don’t use them as their daily habit on Facebook. And when I say don’t use them, I mean don’t click on them, search with them, or give much thought to them.

Maybe you do. Let me know if so, as I’d be interested to chat about it.

Sure, technically they work, but we don’t recommend you spend much time researching which ones to use as the pay back seems limited at best.

That said, when you get into news jacking there seems to be an argument for using the topical hashtags to get your content into the eyes of those viral searchers. Facebook themselves have encouraged the use of hashtags in this way and we can see the argument for getting your posts into popular hashtags, even if they’re not a patch on Insta and Twitter trends.

If you see a trending topic, look at the hashtag on Facebook (by searching the hashtag in the search bar) and seeing what the conversation looks like, and if it is indeed a popular one and worth getting involved in.

Or… just shove it on the end of your post and hope for the best! One or two won’t hurt, right?

Too many reduces engagement

Don’t forget, as we mentioned above, too many hashtags on Facebook is shown to reduce the reach of your posts. This is possibly down to the fact that they were created to help content get found, not allow you to spam every timeline going with them. So choose useful hashtags that you think people might actually click on or search for. That niche one about your Wednesday evening bell ringing at your local church just may not catch on. #WedsPMBellRingingAtMyLocalChurch.

Facebook want their platform to be better, so don’t abuse the option or they’ll crush your sorry ass and not show your posts to many people.

We wouldn’t spend too much time deliberating over Facebook hashtags.

We took a good look at content on the web from industry experts and the main takeaways were simple:

Like anything with digital marketing, this is very much based on a mix of opinion and research – often one-side research from hashtag curating (paid) platforms!

Mix it up, give them a go, and see how they could help you link up your own content with a branded one like #SpaghettiAgency. Who knows… you could drive a few more eyeballs! I just wouldn’t bank on it.

Here are some more fabulous posts on this topic that we found while researching. We’ve shared them below for you to read further if you wish to. #Kind

Struggling because you’re faffing on Facebook? Book a 121 session with me to discuss your strategy and get training in unfamiliar areas of the huge platform. Book your Goldmine here.