When you think about it, lots of things don’t work if you use them incorrectly. 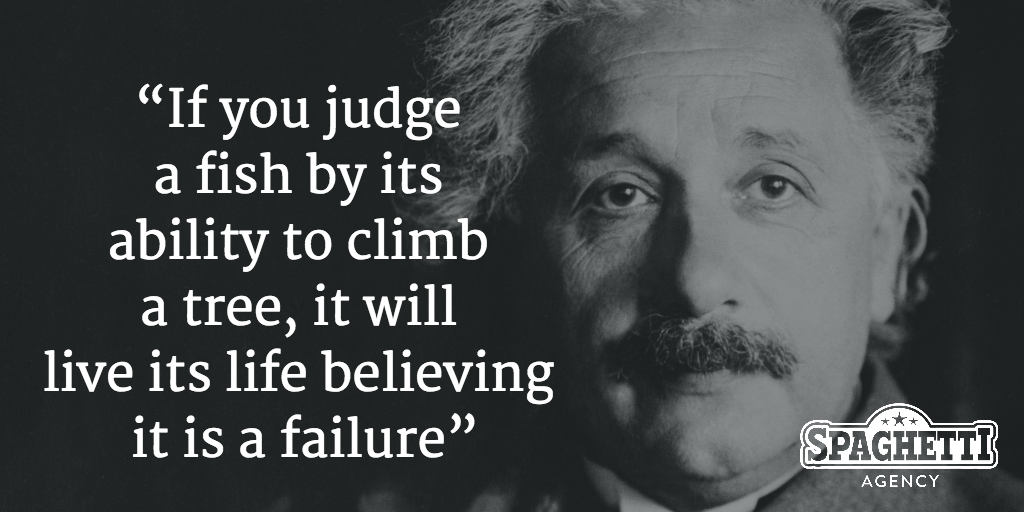 Twitter wasn’t built to drive sales to a wine merchant any more than a fish was designed to climb a tree.

Twitter wasn’t created to be plugged into a robotic system with automated feeds… it just lends itself to that.

But it’s not all about automated systems, bots, Infusionsoft and buying followers and likes.

Social media is about people, feelings, emotions, storytelling, and making a positive difference.

Unplug your systems and open your eyes. That’s when social media works.

I’d be given a smartphone (an iPhone 3Gs) and it made it simpler to tweet on the move.

Until this point I’d been sending a few tweets a day from a PC. I’d send tweets about why people should buy my stuff and then reply to comments hours or even days after they’d happened.

Yeah… that’s not how Twitter works. All day long a conversation had been going on and I was oblivious to it!

So now, with my new smartphone, I was able to ‘join the conversation’ like Twitter told us to, and I was able to join it when it happened.

I was also able to be the conversation!

Gradually I worked out how Twitter worked… but I had no idea I’d found the answer.

I hate selling, you see (I still do).

I really do have a hatred for saying to someone “you should buy this”.  So tweeting “Buy my Rioja” or “Come to our wine tasting” was alien to me.

(Being behind a keyboard made it more bearable, but I still squirmed when I posted those kind of tweets on Twitter.)

So I stopped selling. Not because I realised that people don’t like being sold to, but because I hated the feeling I had when I sold to people.

I was feeling their awkwardness and it had to stop. So it did.

There were vintage cars in the shop, and some of them even worked.

There was bottle upon bottle of wine; each one had a story, a journey and history. And not all of that involved the grapes and the soil. Some of it involved the treacherous collection from the docks or the near death of the wine bottles when the pallet fell over in my van.

I shared it all:

Those stories were interesting and they didn’t always involve wine.

Did it work though? Did it drive sales?

Well, yes… but it brought so much more.

I got offered discounts from suppliers as they wanted to help me.

I filled a wine tasting with 30% of the crowd coming from social media. (Better than a £700 bill for postage that it cost to invite the rest from the mailing list!)

One lady came all the way from New Zealand and bought wine from us.

I’ll tell you about her actually…

Seriously. She was one of those people who you meet and think, “Blimey – what have I done here!?”.

But she liked wine.

She lived in New Zealand and she followed us on Twitter.

There was no way she would buy from us normally, but I still replied to her tweets. (It was just what I did.)

Then one day she tweeted me while she was on a visit to London.

She needed to buy a particular type of Champagne and she needed help.

I gave her some options of wine merchants in London and she bought the Champagne from them.

I’d spent years on Twitter and I’d helped the competition… but I’d helped a follower and that’s all I cared about.

A few months later though, she came to Warwick.

It turns out that the only reason she followed me was because I was in Warwick and I gave her the view, the live stream, of a town she had a real interest in.

She stayed in Warwick (the in hotel I recommended to her who just so happened to be a customer) and then she visited the wine merchant I worked in, twice, and spent £100s.

She even bought one of the vintage corkscrews I’d shared a few times, too.

The thing is: I never knew this would happen.

If I’d not used Twitter and not been speaking to her she would never had come… but this didn’t make Twitter worth it.

Seriously, the time I’d spent on this account was worth more than a few hundred quid.

But this was one of many stories, including selling wine that ended up at the Spanish Grand Prix to a reporter in a pub in London, thanks to me sharing and commenting on a blog post.

I laugh when people ask me to track the ROI (Return On Investment) for social media.

“There isn’t one” I say “Just f’ing do it and accept that things happen when you get involved.”

I never meant to be on TV or radio (several times) appear in the paper (regularly) and I didn’t mean to make Mary Portas smile on ITV.

I didn’t mean to do any of it but it was all great for the profile of the business I was working for… especially the community involvement that I spearheaded.

You can’t measure it for sales either… this was just great PR, awareness, noise or whatever you want to call it… but it DID help people know about us.

I did it under the name of the company I worked for and it did make people notice us… and that’s all I wanted in the first place.

I didn’t tell you at the start of this post, but the only reason I joined social media was to drive traffic to the website and the newly-opened shop.

One day, a young lady decided that she wanted some nice wine for her dad on Father’s Day. She tweeted me and I selected the wine and she came and collected it. (I’d driven sales to the shop again!)

It was only about £20, so it wasn’t going to cover the iPhone monthly bill, but I figured: you never know who they speak to and who they know… or who they are.

Her name was Laura and she’s now and irreplaceable part of Spaghetti Agency and a very good friend – and it all happened from a tweet.

I met someone at 4Networking event last week who already knew me. She said she’d met Jo at networking and I presumed it was from that connection.

She runs a marketing company and she remembers me as the tweeter for Underwood Wines. She said, “I remember seeing you and thinking that this is the first time I’ve seen someone make Twitter work for business”.

She booked on my social media workshop this week… six years after following me on Twitter.

I’m still getting leads and connections from those early days and I also get leads from the tweets I sent last week… you just never know when these people are ready to buy.

And that’s the thing I want you to leave with you: 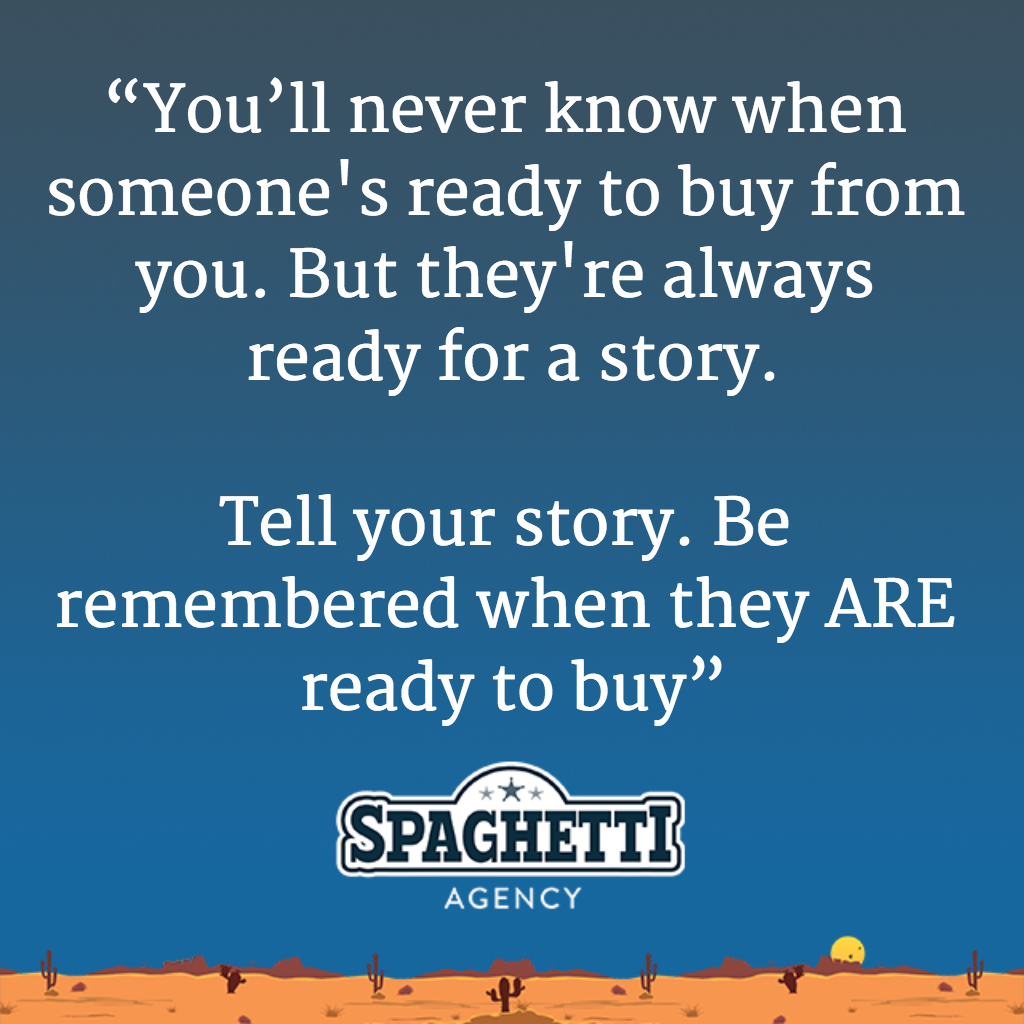 Storytelling, which is what I did as a tweeting van driver, was all I did.

I had no training and no experience. I just shared what I did, what I was doing, and where I was going.

Share the good, the bad and the ugly; just make sure it’s entertaining.

Keep people interested in your story so that when they are ready to buy from you they remember you.

Social media is not about you. It’s about your story and how that’s interesting to your audience.

You never watch a film for the benefit of the actor. (Well, Jo and Laura watch Ryan Gosling films a lot.)

You don’t eat food to help the manufacturer… well… unless there’s a Fairtrade or charity angle… then you’re buying the story.

You always buy what’s in it for you and you always remember a story. I bet you can remember this one without going back and reading it again.

Tell your story. And don’t tell me it’s boring and no one will care. Look at reality TV – people care!

Humans are nosy and they want to see behind the scenes – it’s just human nature.

Give them something to see that will remind them to buy from you when they’re ready!