Business Networking Works When the Meeting Ends; Not During the Meeting

Despite what some people tell me, it works on so many levels.

It works on a personal development level, a professional level, a social level, and of course a business level.

Networking has helped me grow a business and grow a network of people who grow that business for me.
Networking works… when you treat it well.

But lot of what makes business networking work, happens when the meeting ends; not during the meeting… 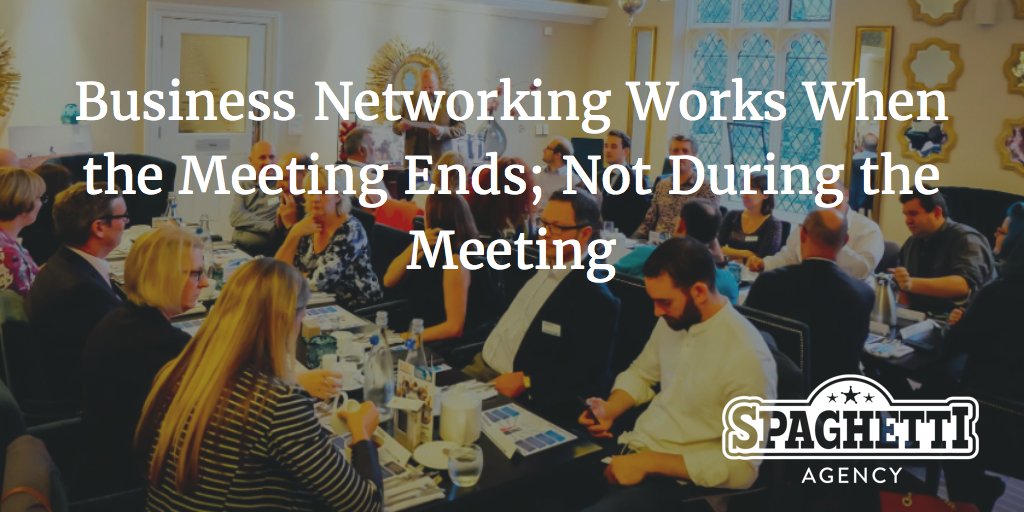 Business Networking Works When the Meeting Ends; Not During the Meeting

I blogged recently about when networking doesn’t work, so now I’ll give you some advice about what to do after networking that puts the ‘work’ into networking.

AYou’ll meet people. They’ll meet you. You’ll swap cards, have a chat, and share a coffee.

But then you leave and if you don’t meet up again that’s where the relationship stops. Dead. Right there in that meeting.

Here’s a recent example from Jo:

“Recently I wanted to refer a new connection to someone I met about a year ago. I thought they could help each other. But could I remember the name of the person I wanted to refer to? No! Because it was a long time ago and things have moved on. We didn’t speak after we met so it’s vanished from my mind. Who knows what that could have become if they’d have been more available or memorable?”

If have an interaction or a conversation that piques your interest – follow up!

Following up (or not) is the main reason your networking works or doesn’t work. Use email, text, messenger, the phone, or whatever you think suits – but do it.

Networking meetings are the start of a conversation

If you have a positive conversation in a networking meeting then that’s great work and good news for you. Even better news is this: it’s only the start of the conversation.

Most of what happens in networking meetings is really just a green shoot of interest, the tip of a conversation iceberg, and the end of a piece of string question that could lead to more business.

Don’t see those conversations as standalone moments – view them as the start of a beautiful relationship!

Networking meetings are a small part of your networking

When you think about it, the networking meetings you go to are only a tiny part of your networking. When you follow up, meet up after, call or chat on social media, they’ll fade into insignificance. The meeting is really a tiny part of it.

Be committed to spend more time networking after your meetings. It’s where the magic really happens.

Networking and social media together speed it up

Talking of social media (which I do a lot of these days!) social media really helps to speed up your networking.

It shouldn’t take the place of your calls or emails as they are very relevant follow ups, but use social in conjunction with your follow up process and you’ve really got a winning formula.

Social gives you a really good insight into what your connections are talking about or to, and social gives you up-to-date knowledge for your prospect for your follow up conversation.

Too many people view social media as a broadcasting tool, but it’s not. Use it as a fact-finding listening tool and you’re much closer to winning at social.

Find those connections you meet on social media and use the information you have there to form a better follow up and a greater relationship builder.

You’ll be amazed how powerful a tool it can be.

… but the good news is: that means you can really make a difference.

Imagine working hard on your follow ups when your competition aren’t and imagine how much better you’ll be when you have some great info and insights in to your prospects.

We can help you with this!

If you’d like to chat about it just get in touch.