Nobody ‘LIKES’ David Cameron… or do they?!

I just hit publish on a post about faking it on social media and there’s a gem of a headline about our own PM buying likes on Facebook. Clearly this is BIG news and The Independent have crafted a perfectly attention-grabbing headline to go with it: “David Cameron resorts to paying for Facebook fans because not enough people like him.” (It got my attention!)

So another social media blunder has emerged. Does this follow the hilariously viral ‘on the phone to Barrack’ photo that caused brilliant copycat ripples through celebrity Twitter accounts? 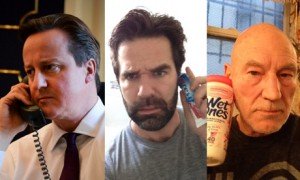 I have to disagree with the headline and the context of the article. Although I’d love to be able to point the Fakebook finger at our hapless and socially incompetent Prime media leader, I just can’t. Because the fact is… people do ‘like’ him.

Nobody ‘LIKES’ David Cameron… or do they?!

David Cameron hasn’t, in fact, just bought any likes as the headline suggests. As the article explains, he’s had to advertise on Facebook to get his page noticed. David has had to do what many of us marketers now find ourselves forced to do to prevent ourselves from being forgotten, or worse – never found in the first place.

What David Cameron has (allegedly) done is spent £7,500 on Facebook ads targeted at people to announce his page’s existence.

By doing this, his little face has appeared on people’s Facebook pages and they clicked ‘like’ on his page. They actually clicked like and now he appears in their timelines.

This means that now David Cameron has the opportunity to get his message across to his mainly 18-34 year old Facebook audience. Or, as he’s demonstrated lately, maybe just make more class social media cock-ups.

The main point for me from all this is – he hasn’t bought likes; he’s merely had to pay to be noticed on Facebook! This is worrying, not because he should be a superstar like Obama, but because it cost our own Prime Minister a sum of £7,500 for a reported extra 65,000 likes. Yikes!

It’s not that people didn’t want to like him previously; they did click like when his ad appeared in their timeline. It’s that they didn’t know about or see his Facebook page beforehand. Or perhaps they saw his page and decided to pop on and give him a piece of their mind. Either way, if you’re a small candlestick maker about to venture into Facebook Pages, that’s a worrying thought.

The strange thing about all this is that David Cameron is like a wannabe cool uncle that just gets mocked all the time. He’ll never be cool and he’ll never gain anything close to respect on Facebook. Just head over and see for yourself – it’s painful.

I’m not really sure why some politicians use social media to be honest. They often hop on Twitter ahead of an election to drum up support and then leave for the rest of the year. And Facebook just seems like a ‘lamb to the slaughter’ type of affair and not really a sensible PR offensive for those with waning levels of popularity.

I do have to hand it to David for trying though. He’s spotted that most people in this country (and the world) are on social media, and that’s more than can be said of some businesses who still shy away from it.

So David, here are some Facebook tips for you:

Failing that,  maybe you should read 11 hidden tricks that will make you love Facebook again. (Some great tips for the PM in there too!)