The power of reciprocation in social media

In the world of social media there’s a monster taking over, and it’s crushing the power that makes social media work. Social media automation is a great way to keep a consistent presence on social media channels and it helps us as social media managers create a good framework of posts containing useful information…

But! If all you ever do is automate your social media output then how will you take advantage of the power of reciprocation? Social media is all about interaction and most of the great things that happen are because of connections. If you’re not actually there then you’ll miss out.

The power of reciprocation in social media

Why is reciprocation so powerful?

Forget social media for a minute. Reciprocation has been working its magic in society since time began. Robert Cialdini book The 6 Principles of Influence is a fascinating read for anyone involved in business. The idea is that we’re all driven by some basic but powerful influences of behaviour. It’s a very interesting and thought-provoking book and comes highly recommended.

Reciprocation is one of the principles of influence. Without drilling right down into it, the basic idea is that when you do something for someone, they feel obliged to do something for you. Does that ring true for you? When someone has helped you in the past, did you feel indebted to them and did this create the need to help them back? If you don’t reciprocate it’s almost like they have the upper hand.

Bring this back to social media and you can see how it would work for many situations in your timeline. Twitter consists of millions of conversations and you’d be forgiven for not realising that it’s driven my reciprocation – but it is! 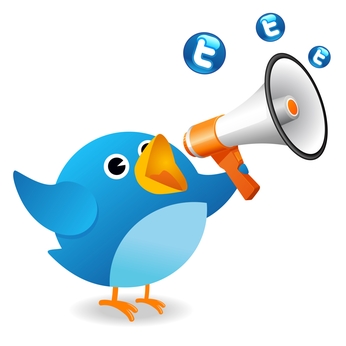 Here’s the obvious one. Following back is always a great discussion point during our social media workshops.

“What’s the polite thing to do?”

These questions rise from the need to reciprocate. My answer is always:

“Follow back if you feel they offer you value.”

The fact is, if you follow them back they’re more likely to stick with you. A good way to gain more followers is to follow new people because they will often reciprocate the follow.

This is what drives Twitter. Following back is a powerful way to build your audience and it all stems from the powerful inbuilt need to give back.

Takeaway: Try following back and following more people to build your Twitter army.

I often retweet my competitor’s posts. I know that may sound crazy but this works too. I’m confident in my ability and because of this I’m really happy to share great content from my competitors.

I’ll happily retweet an article by a competitor if it offers value to my audience – that’s why they follow me – for the content! Then, guess what? My competitors actually retweet or share my posts in the future. This then gets my content in front of their audience too. Sharing’s caring!

Takeaway: Retweeting other people’s content gets you future retweets.

I always say: “If you can help someone online then do so” and that includes helping someone with a subject that’s completely removed from your business. Obviously it’s a nice thing to do and it’s good to help. But also, one day you will need help and by building a group of people that you have helped you will have more chance of getting help back.

Takeaway: Be helpful and people will be drawn to you. Help out wherever you can and try helping influential people for future ‘power allies’.

Commenting on posts, tweets and other online content is a powerful way to build a following. Commenting on other blogs is a great way to build your blog’s audience. It’s not only great for the author, but on platforms like Facebook and Google+ it gets you in front of the author’s audience too as you appear in the comments section.

I always take the time to comment on Facebook and Google+ posts if I can offer a productive opinion. This is a great way to connect with influential people and businesses as well as gaining new followers and fans from the author’s audience.

Takeaway: Show an interest in other people’s content. It’s not all about promoting your own stuff.

I buy products from people I find on social media. When I connect with someone (and I mean really connect) then I’m more likely to buy from them. I recently bought a book by Dee Blick (@DeeBlick) just because she posted on Twitter that it was selling really well (social proof is another principle of influence).

I didn’t buy it off the back of just one tweet though. I’ve been following Dee for a while and I like her style. Her engaging tweets and inspirational content is great, but the reason I bought from her is because we interact.

Simple right? You need to actually talk to your audience!

Dee will always reply to comments made on her posts and that makes people feel good. She’s an established author with almost 4,000 followers so she’s a busy lady, but she tweets live and responds.

I bought Dee’s book (which is great by the way) and I told her that I had. She then responded to ask if I would like to be part of her next book. My reasons for buying her book from a Twitter feed will appear in her next marketing book. Boom! That’s me connected for a long while yet. Clever interaction and genuinely being yourself works.

I’ve bought books from Brad Burton (@BradBurton). I’ve seen him give live talks a few times, I’m going to his networking event in London, AND I’ve tried his company 4Networking too. Why? Because even though he has over 130,000 followers he responds to his tweets.

Because I have a link (although only small) I feel like I want to reciprocate that by buying the products. Sure, they have to be something that I’m interested in, but then I wouldn’t follow them if I wasn’t into them. By talking to their audience these two authors are selling books. Simple.

I was recently followed on Twitter by Tim Fargo (@alphabetsuccess) after a quick chat on Twitter. He has a huge following of over 80,000 but he also interacts with his audience.

When Tim followed me he did something really cool. He went through my tweets, grabbed one of my #ToddsTips that I share a lot, and rehashed it. He turned it into his own tweet and mentioned me at the end. He shared my tip with his whole audience and of course that made me feel awesome. I’ve since followed him back and am looking at his latest book which I now see tweets about – clever!

Takeaway: Are you using social media to broadcast or are you building an audience of fans?

Here’s an idea. Give away your knowledge on social media and watch the reciprocation wheel drive business your way. Share your knowledge and create an audience to sell to. People will only buy from you if you know what you’re talking about, so content marketing is a great way to show this.

When you share your knowledge to your audience and then they share it that’s reciprocation! You helped them, and then they felt compelled to share it.

Takeaway: Share your knowledge and start your reciprocation wheel turning.

I’m always banging on about social media just being another way to communicate. I often find myself in front of confused business owners who look to us for advice and help.

I say to them:

Social media is an extension of what you’re already doing in your business and life. Reciprocation is the same. This isn’t a new thing and when you think of social media as just a new way to convey your message and communicate you’ll find that it’s easier to see.

We’re all driven by the same desires and reciprocation is a power that you can harness. Go out there and start building a list of people with IOUs! Help people, retweet people, share blogs, comment on posts, whatever you can do – build that audience and build those IOUs.

Now it’s your turn. Have you had some great reciprocation lately? What did you do to get someone to help you? How will you try to master the power of reciprocation for your social media channels?