Social Media: The Web’s Your Oyster

This week we have a guest post from Pippa. Pippa is 14, active on social media and well… a bloody good writer. We wanted a different view of social media from those young folk… the ones who’ll run our country one day and the ones we look to for trends and “what’s next” online.

All we asked Pippa to do was write about what social media meant to her and how important it was. That’s it. Simple quesiton and we got a great answer. 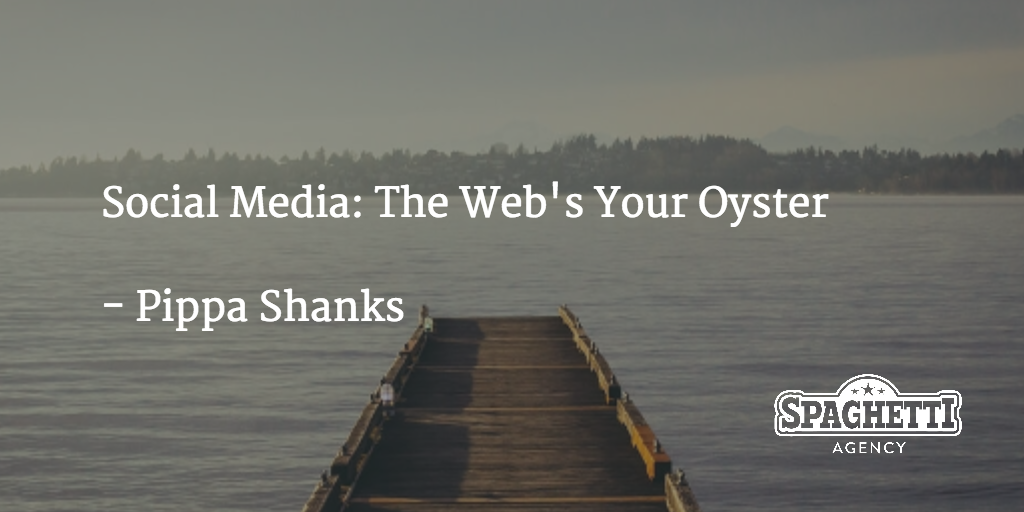 Social Media: The Web’s Your Oyster

Before I dive into the depths of social media and what it means to me I would just like to thank the one and only Todd for allowing me to be one of the first guest writers on his blog. I’m honoured but really feel the pressure to be just as good if not better than @SocialMediaTodd himself!

Social media:  What is it? Why do we care for it so much? And why is it that the first thing we do in the morning is check our phones? The sad reality is that we need social media; it fuels us and we use it to contact friends, build businesses, and to make mistakes – I know I have.

But is it really a sad reality? Is it sad that people have started a new life thanks to Twitter, and thanks to tiny things like a board on Pinterest named “Designs”?

For me, a teenager, social media has helped me become who I am. It’s helped build my personality. I live everyday with my sidekick, Depression, and his best friend ED. When I’m feeling low I go into the bright and colourful Grand Hall of Pinterest and search things such as ‘simple sketches’ or ‘hair and beauty’ and that cheers me up enough to get out of bed, get dressed and maybe even crack a smile.

In 2009 I joined social media… Yes, I was eight years old. The reason for this being that my dad had just died two years before and all of my siblings were on it. I needed a distraction; a coping mechanism. Enter Facebook.

My first status being, and I quote; “la la la la la la la,” Yeah… My tiny, little brain was singing. Facebook asked me what was on my mind, so I told him. Social media is where you can be yourself and just sing if that’s you!

The truth is, while writing this I’m flicking back and forth between Facebook, listening to Joe Dolman’s playlist on YouTube, making plans on Snapchat to meet a friend, and of course, drinking a cup of tea, because who can do anything without tea or coffee?

Joe Dolman, for example, is now working full-time, when not at Uni, doing gigs and earning money for it too. He has a YouTube channel, Facebook page and Twitter account with regular updates about upcoming gigs, new songs and just normal stuff that any guy his age would say. His voice is amazing and he sings from the heart. Definitely worth having a look! But most importantly, Joe uses social media to his advantage.

“I’m not at that stage where I can play 02 academy tours… so I play gigs in less known, smaller venues, which some people don’t want to go to as they haven’t heard of it and don’t trust it or don’t want their kids going there, which is totally understandable.”

I like to see social networking as a party and everyone is invited… if you’re cool enough. There are expectations to meet. But anyone can meet them. You can create a whole new person. You can be whoever you want to be! The web is your oyster!

I, personally, think I could live without Twitter, Facebook, Instagram, Snapchat, Pinterest, Tumblr. The only thing being is I wouldn’t be able to express myself like I am now. My anxiety is too bad. You can say anything behind a computer screen (in moderation) because you don’t have to deal with the shocked look on people’s faces. You don’t have to deal with the judgment.

So, there.  I, Pippa Shanks, have just spilled my heart out and I’m not going to clean up the mess!

I’d love to hear what you think in the comments below! X

10 comments on this article