I love using Twitter for events because I know how powerful Twitter can be when you couple it with an event, whether it’s an awards ceremony, an expo or a simple networking event.

Live tweeting and Twitter for events have always been something I’ve got myself involved in.

It’s been one of the ways we’ve boosted work and awareness of our agency, Spaghetti.

Our own launch event trended on Twitter back in May and we’ve also worked with event managers, live tweeting for them. We’ve also live tweeted Touch FM’s ‘Pride of’ awards, helping their events go viral on Twitter. 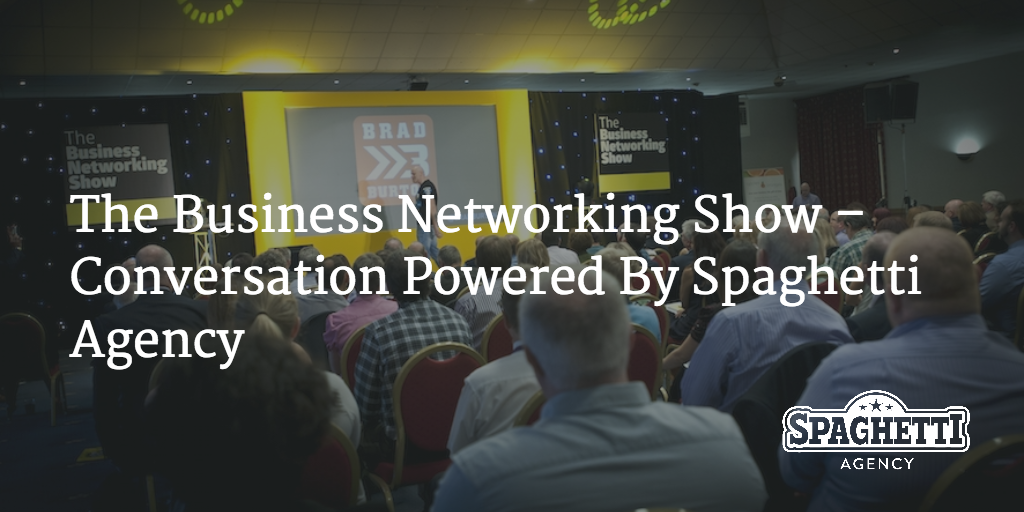 Several months ago we were given the opportunity to tweet for The Business Networking Show. We went last year as attendees and were very impressed with it. We tweeted and shared the day on our timelines and we both really enjoyed listening to the speakers.

Brad Burton, MD of 4Networking and driving force behind The Business Networking Show, called me up and asked if we’d be interested in running the Twitter account – to save him from having to do it.

Although he loves tweeting (he’s obsessed!) and knows it inside out, he’s a busy man and he really wanted to make this year’s buzz bigger and better.

He wanted Spaghetti to look after the account, so we said yes!

Brad Burton owns a national networking organisation so it’s fair to say he had a few options to choose from… but we got the call.

Now I’m not intentionally boasting here. I just want you to understand something, something that I always try to teach. We’re ourselves on Twitter. And Brad liked it.

He thought we were a good fit for TBNS. He wanted what we gave to our own accounts and he wanted ‘Cowboys and Yeehaa’ on the TBNS timeline.

He bought into us as we were the right fit for this job. Not everyone’s prepared to be so loud, proud and different. I swear a bit on my Twitter, I’m excited and animated. It’s just how I am. I’m not shy in telling people they suck at social and that’s what he wanted for TBNS: not social media advice, but balls… big yellow ones.

So we took on the already established account, @TBNShow. The main aim was to make some noise, create some hype, share the story and help sell out the stands and tickets.

From the outset this was never going to be easy.

The market is flooded with business events and Twitter is very noisy, but I stuck to my guns. We’re different and we make our noise in our own way.

We researched and chatted to the speakers and found out what they were about. We learnt about the show and what it meant to us last year.

We shared the stories as they came through and we tried to create a rich feed of content that was actually useful to read and not all about buying tickets and booking stand places. No one needs a boring sales pitch.

The speakers held the key to social media success

The speakers for this show are phenomenal and it was a joy to share their content. I’ve had some great Twitter chats with the keynote speakers and they’ve in turn retweeted our content and shared information about the show.

The keynote speakers were my first target as they’re big (really big) and they have a massive following. I wanted their help but I didn’t just simply spam them and beg for RTs.

I used their content to entertain and amuse the TBNS followers as well as giving them great content to help them. This in turn pleased the speakers who were only too happy to RT their own content shared from TBNS… it just happened to have the hashtag in and mention that they were keynote speakers.

We also created a set of memes with one-liners from the speakers. They’re like inspirational quotes and were branded with the shouty TBNS yellow thanks to Paul at Big and Bold Designs.

Whenever we shared these we @ mentioned the speakers in the tweets and the speakers RTd them; it gave them great content for their audience.

The speakers obviously liked them because they came up with the one-liners in their blogs, vlogs, podcasts and anywhere else we trawled for them. Of course it all helped raise the awareness of TBNS as the logo and URL were on the meme, too.

One particular magic moment was when Chris Ducker took one of the memes we created and put it in front of his 11K Instagram audience. Brad’s genius idea of always making his memes square of course lends them perfectly to Instagram.

I am so ridiculously looking forward to keynoting the Business Networking Show for @bradburton and team, in the UK just 6-weeks from now! Gonna be a blast!

Other speakers also shared their memes and they sent waves of yellow through Twitter for the weeks that we shared them. We kept using them through the last few weeks too.

I also wanted to engage with people involved with the show. I started speaking to the exhibitors and we shared tweets and conversations about many things.

Over time, they RTed my content and got on board with sharing news about the show. It benefits both sides but it was me approaching them first as the initial approach that got the fire stoked.

Another focus was building the following. I could have added 10s of 1000s in minutes with a few quid but that’s pointless.

What we went for was a targeted audience of businesses in the UK who would be interested in the show and would support the movement of TBNS.

The followers have grown well and to date it’s more than doubled in size with an entrepreneur and business focus in the top follower interests – the right category for the show!

This gives us a good, strong and large audience to talk to that will not only be interested but will also see our messages. Early on in the campaign the stands sold out and although I can’t take all the credit, conversation about the stands will have helped it all along.

Are you ready for after the summer?

Back in early summer there was a bit of controversy about some tube ads with good looking people promoting Protein World. The ads were very yellow and very much in the news for all the wrong reasons but it worked well for them… no news is bad news, right?!

The exposure they got was huge and I wanted a piece of it.

I emailed the team at TBNS to explain an idea I’d had whilst surfing my Facebook timeline. The colours were so similar to the TBNS brand and I’d come up with the idea of “Is your body networking ready?”. 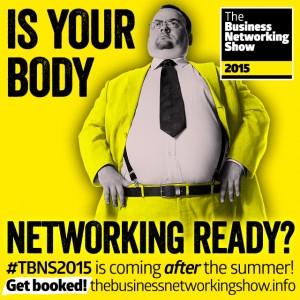 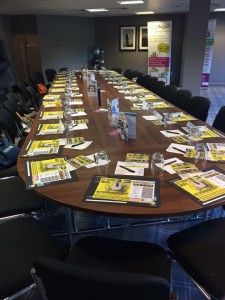 The idea was quickly turned into my large networking friend who, not only became a meme shared by the audience that I’d been talking to for a few months, but also made it onto every 4N table in the UK.

Not bad for a moment of inspiration from Facebook!

The vibe and buzz for this event has been awesome and everyone involved is getting it. Twitter has been a great way to make the speakers, exhibitors and attendees feel like they’re all part of it.

Using Twitter to keep them up-to-date and chatting and connecting has been a great use of my favourite social media channel.

The next challenge will be tweeting live at the event and sharing the day. Many companies only really start to tweet then but we’ll be at the end of a great and long campaign by the time the show starts.

The day of the event is only a very small part of it for us. Although I’ll be smashing through a few 100 tweets on the day the build up and after show conversation actually takes up more work and time.

Twitter for events like this is great because you can really use it for all the different stages. 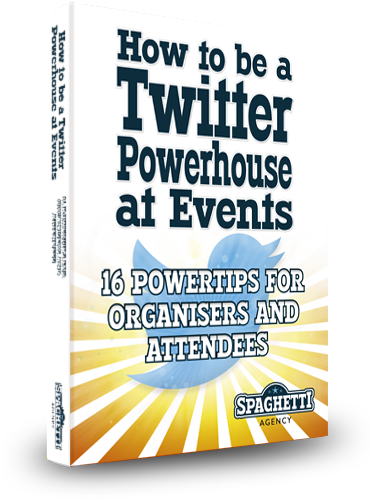 When the final curtain draws on this superb event we won’t stop. We’ll keep the conversation going and share feedback, blogs, tweets and inside plans for the next move or event.

Twitter starts working for events very early on and the build up to this has been a four month intense campaign with a lot of change along the way.

It’s totally free and gives you a breakdown of before, during, and after events like TBNS. You should really grab a copy.

The Business Networking Show has been a loud, proud and fully energised account to run and it’s not over yet. The day of the show will certainly keep my tweeting fingers happy and we hope to get #TBNS2015 trending locally if not nationally. If you’re going I’d really appreciate your help in make that happen.

Share the story, make it interesting and valuable and don’t just focus on selling tickets. A show or event has many angles and Twitter should share all of those.

If you need help making your event or campaign shine on Twitter then give us a call at the ranch. Adding Spaghetti to your events might be the best addition yet!