The General Election: Why It’s No Different From Your Own Business Marketing

So we have a new Government.

We (finally for us in Warwick) know who our MP is for the next five years.

It’s been a long wait for some and I’ll leave my thoughts on electronic voting for now. (Seriously… counting pieces of paper? In 2015?)

But what can we learn from the big four campaigns for our marketing?

(Election and politics aside).

I should point out here…. I’m not into politics like Jo.

You probably know more than me about it.

I’m a dunce when it comes to policies, referendums and shuffling cabinets.

But I do know about marketing and I do know how to attract people to a movement or cause. 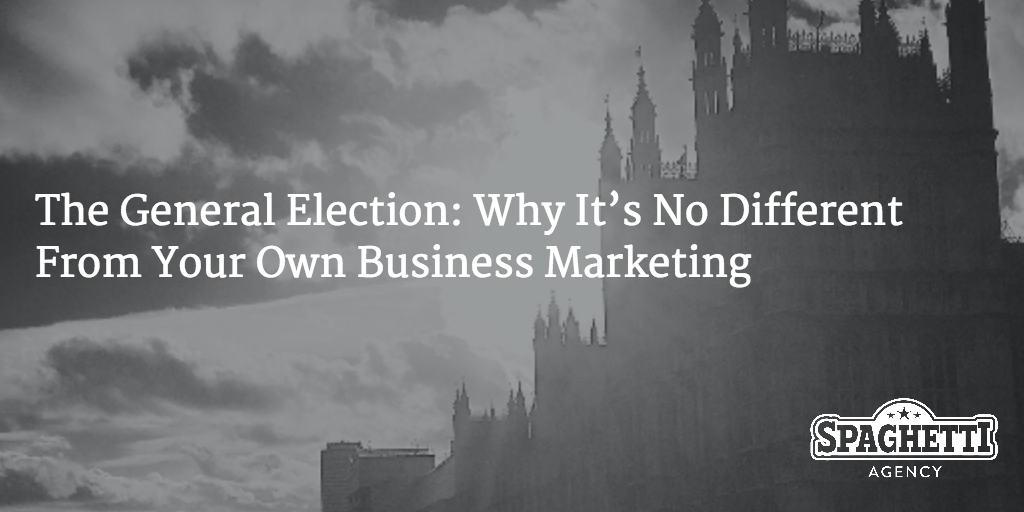 The General Election: Why It’s No Different From Your Own Business Marketing

First and foremost, here’s my take on what’s happened during the 2015 General Election…

On the whole and IMHO this has nothing to do with:

No. The 2015 election has everything to do with media and marketing.

We all buy into marketing and we do it from 1000s of years of reptilian brain reactions. We’re all human and we make decisions based on our gut, every day.

And not for one minute is any of this unique to politics.

We buy (from politicians, brands, shops, or businesses) from people.

This is not news!

People buy into people – but more importantly we buy why they do it, and not what they do.

What we see with the results from the election backs up this theory, and if you’ll listen to my non-political mind for a few minutes I’d like to explain it how I see it.

Here’s why the election is all about marketing…

I know nothing about their policies. I know nought about Nicola Sturgeon and I don’t understand why Scotland want to be free from the UK… actually I do… they want to be like Mel Gibson: “They’ll never take our freedom”.

Nicola Sturgeon was great on the Leader’s debate, wasn’t she? She was superb at speaking, and her ability to engage and rise above the others really won her votes… because of the way she acted, held herself, talked, looked and spoke.

She won people’s votes because she was good in the public eye and her marketing, her ability to be her, was good.

Then we look at Ed Miliband. Ed is a bit of a hapless idiot, isn’t he? His strange demonic eyes were trained to stare down the camera, and we felt it wasn’t genuine. His smile looks fake.

His trip on stage and that silly marble ten commandments-esque slab he created really hurt his party’s chances.

His policies may have been good. His views on the NHS, childcare and energy bills may have made sense… but to me (a non political understander) he was just a dickhead.

Seriously. I’m not alone in that view. How many young voters do you know that really… really and truly voted on policies? (More on that shortly.)

Now unfortunately I have to swear on my blog. I know I’ve already said ‘dickhead’ but I’m about to say the ‘F’ word.

Nigel Farage did pretty well during the actual campaign.

It pains me to give air time and focus to such a cretin, but he did well. He ruled interviews and he made a real noise.

Farage was the king of guerrilla marketing.

Guerrilla marketing is not normal marketing.

It’s the type of marketing that’s designed to make you stand up and listen… and people listened – and some even voted for UKIP.

From blaming gay people for the weather to drinking pints and drinking fags and then spending £1.5M on billboard ads accusing foreign workers of stealing our jobs, he made a racket!

True or not, he really went for it and he was a dream for the Express headline writers…

He was the Katie Hopkins of the Election, wasn’t he? He said things and pissed people off for his own PR gain. As the great phrase says “There’s no such thing as bad publicity”

Let’s not forget that Farage even beat Russell Brand on Question Time. He did so much better and left people like me (self-confessed BrandFans) in awe of his public appearance. I actually said “God, he’s good on camera!”

But thankfully for anyone who isn’t all that keen on sexism and racism, he’s gone.

Ultimately your marketing is only as good as your business. If you’re a shitty person or you have a crap business you’ll probably get found out.

Then we look at Cameron. His party beat the rest and yet they have already had five years at it and many think he’s screwed it all up and ruined the UK. Lots of people seemed disappointed on Twitter today. I can’t comment. I’m a political dunce here, remember?

I Cameron won headlines on Googlebox for standing up and fighting for his party. He rolled up his sleeves, took off his tie and got stuck in to show he was a real person or something. But he failed to turn up to a debate (which won the headlines) and then he sent that awful tweet when he won with his wife that looked like the poor man’s “Four more years” tweet from Obama.

Here’s to a brighter future for everyone. pic.twitter.com/EeN0YFAvBm

But he is the most searched of the four leaders on Google.

Why is online and social media important for the Election?

Well answer me this:

It’s entertaining and simple to understand and that’s why social media works… or at least that’s how you should use it.

It’s easy to remember and it’s easier to talk about and that’s why the simplest of things go viral.

I’m not saying Cameron is a social media guru, but he’s used the social channels well.

We need to know, like and trust someone to ‘buy’ from them

So we do know, like and trust him on some warped level!

How many people in the UK can vote? (About 42M) And how many of them studied politics at University or understand it in depth?

How many people turned out to vote, and how many followers does Russell Brand have?

Russell Brand has 9.6M followers on Twitter – that’s a third of the 27M who voted. The guy has influence.

Marketing… it’s not about politics

David Cameron not only had a better reach on social media marketing but he had better brand awareness.

Although Farage and Sturgeon did well to gather ground they were far behind the huge and established brand of Cameron’s Tories.

Although Miliband and Labour had a lot going for them on paper, he just didn’t come across well on TV.

People didn’t like him… or at least not his brand.

I’m going to tell you who I voted for.

I know people don’t do that normally but I don’t care if you know.

I voted for Chris White.

As I said at the beginning of this post – “I’m not into politics” but what I am into is people (and so are you and the rest of the UK when you think about it).

He supports us in our journey with pats on the back when we see him the pub.

I like what he likes and that, to me, is important.

This morning I asked on Twitter if the Tories being in power was good for small business.

I own a small business.

Maybe I should’ve asked that yesterday!

Maybe I shouldn’t have.

Maybe I want to vote for who I like and know more than I do for who can help my business?

(Maybe I should pay more attention to politics. God knows Jo’s tried to get me involved.)

I’m not alone though.

There are millions of voters, like me, who voted on top level branding and awareness and not for someone who can’t eat a bacon sandwich.

I’d vote for Obama, you know. He’s cool and good on Twitter and for me that’s important.

Tactical voting is something I can’t really comment on.

But in my opinion, this wasn’t about politics. It was very much about marketing, people and brands.

We’ve also seen the diagram this morning about how the ‘first past the post’ voting system isn’t fair because with the percentage of Green votes (about 4%) they should have had 24 seats rather than one. Again I’d welcome your views on this.

Now… it’s your turn. I know nothing about politics and this is my take on it.

Am I wrong? Am I crazy? Or am I making sense?