We’re Not The Usual Shovel Sellers

As you’ll have noticed, the great Wild West inspired the branding for Spaghetti Agency.

The wild frontiers of the west have many connotations for the online world for me.

It’s full of hopes and dreams, and many are making a lot of money from the internet and the “laptop lifestyle”.

But most people are simply getting by, and some businesses are struggling with it.

Many simply need rescuing from the cowboys. I’m here to do that.

Back in the Wild West in the height of the gold rush there were many hoping to make their riches with these unknown plains.

Some folk actually made a lot of money, but many did not… and lots of people made money from those people who failed. 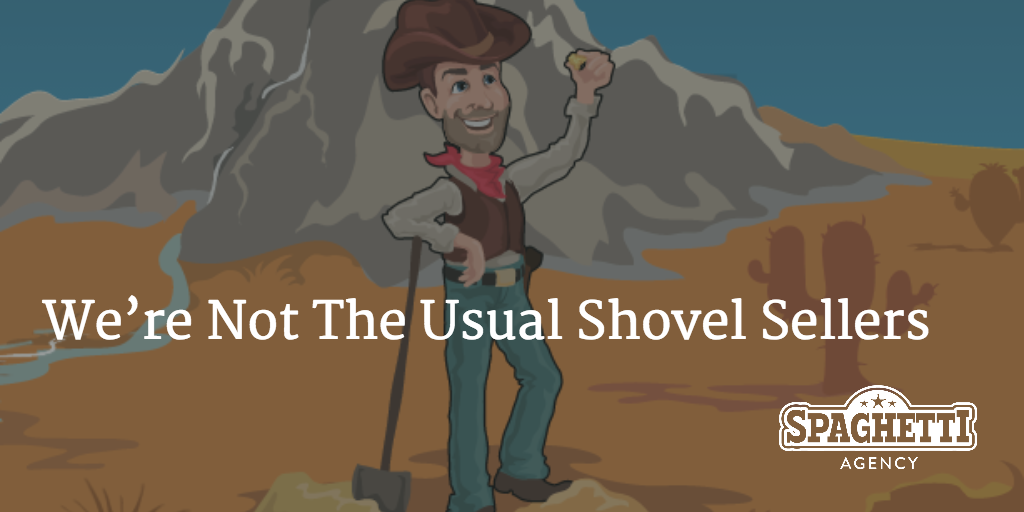 We’re Not The Usual Shovel Sellers

Shovel Sellers Did Rather Well Out of the Gold Rush.

They sold shovels to the hapless diggers, the people with hopes and dreams, the gold rushing fools, out to make their millions.

The shovel sellers actually did better than the diggers.

Yup, the people selling the shovels (and the dreams) beat the people digging for gold.

The shovel sellers saw an opportunity-a guaranteed one-and they made it profitable for themselves.

These shovel sellers gave people the tools they needed to succeed, but with no guarantees that they actually would.

The tools they sold would work (the shovel would shovel dirt and mud) but it didn’t always strike gold.

So Who Are Today’s Shovel Sellers?

People who say that they can make your business succeed with online and social media.

They say that… but do you see any gold when you look further?

If those shovel sellers had the shovels and there really was gold in them there hills… wouldn’t you expect to see some with them?

Wouldn’t you think that they would be out there digging for gold themselves?

Social media ‘gurus’ have long been a source of annoyance to me because they are the shovel seller in my industry.

We’ve Been Teaching People To Use Social Media Since Before We Even Had A Business!

I used to tweet for a small business in Warwick. I ran their Facebook and blog and looked after their website and wrote content for articles and magazines. I was their van driver… but I made myself their marketing department too.

It worked, so I started training other businesses to use social media long before I had a digital agency.

I also got a lot of media attention for the town and I did all this alongside my day job.

Now I teach businesses to make social media and online marketing work for their business whilst still running my own… while I still dig for gold.

I don’t teach what I don’t do well – and I don’t expect someone to do something, to pay for something, that I haven’t tested and made work for me or my clients.

Shovel sellers don’t do this.

Shovel sellers give seminars and talks and can’t answer the questions… as they don’t really know what they’re talking about.

Shovel sellers run training workshops for Twitter and Facebook despite the fact that they haven’t used it to create their business, to drive sales and to build important connections within their business.

They’re selling the shovel; the tool, but they’ve never really been able to strike gold with it.

The thing is… it’s as obvious as those shovel sellers in the west. If what they knew was so good – wouldn’t they be doing it?

Wouldn’t they be digging?

They’re making money out of the online world without ever making it work for themselves.

People say that we ‘walk the walk’.

We do. We actually use the tools; the shovels, that we’re selling for ourselves – and we even get people to our workshops through the channels that we’re teaching people to use.

(And we strike gold occasionally, too.)

We’re here to help you navigate the Wild West of online marketing and avoid the shovel sellers.

If you pop into the ranch sometime we’ll help you too.