As long as you’re there for replies and as long as you go live and join in the conversation, they’re well worth using.

Having a digital skeleton of tweets really helps to keep your content flowing and it really does boost traffic to your website.

But (and it’s a big but) you can’t just automate… you have to turn up too. Automation gives you the chance to be around when you don’t have time – but it shouldn’t be a 100% substitute for you.

I do use a scheduling tool and I’m always asked which one I use and which one is the best. It’s hard to answer this without being biased, but I’ll try to.

There are three main players in the Twitter scheduling arena and they are; Buffer, Tweetdeck and Hootsuite.

But which is best for you? 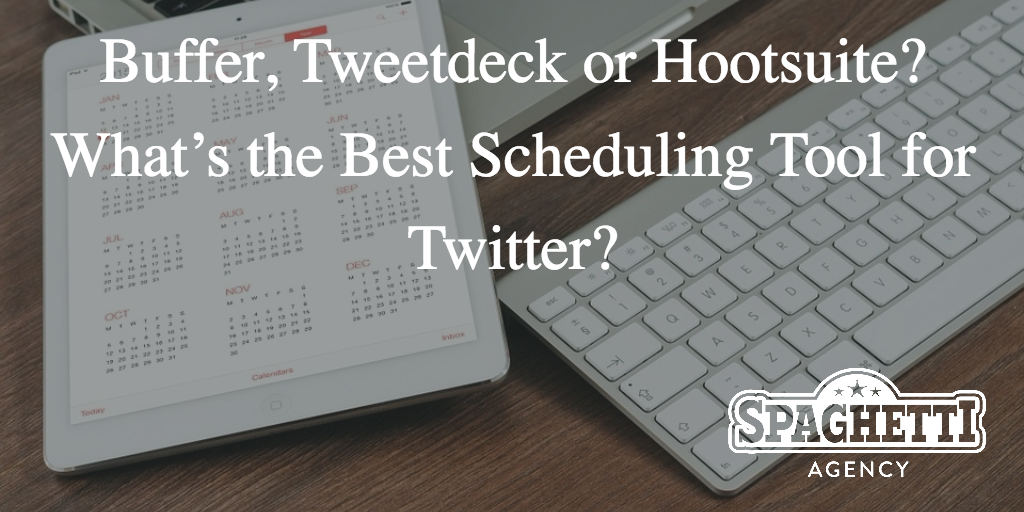 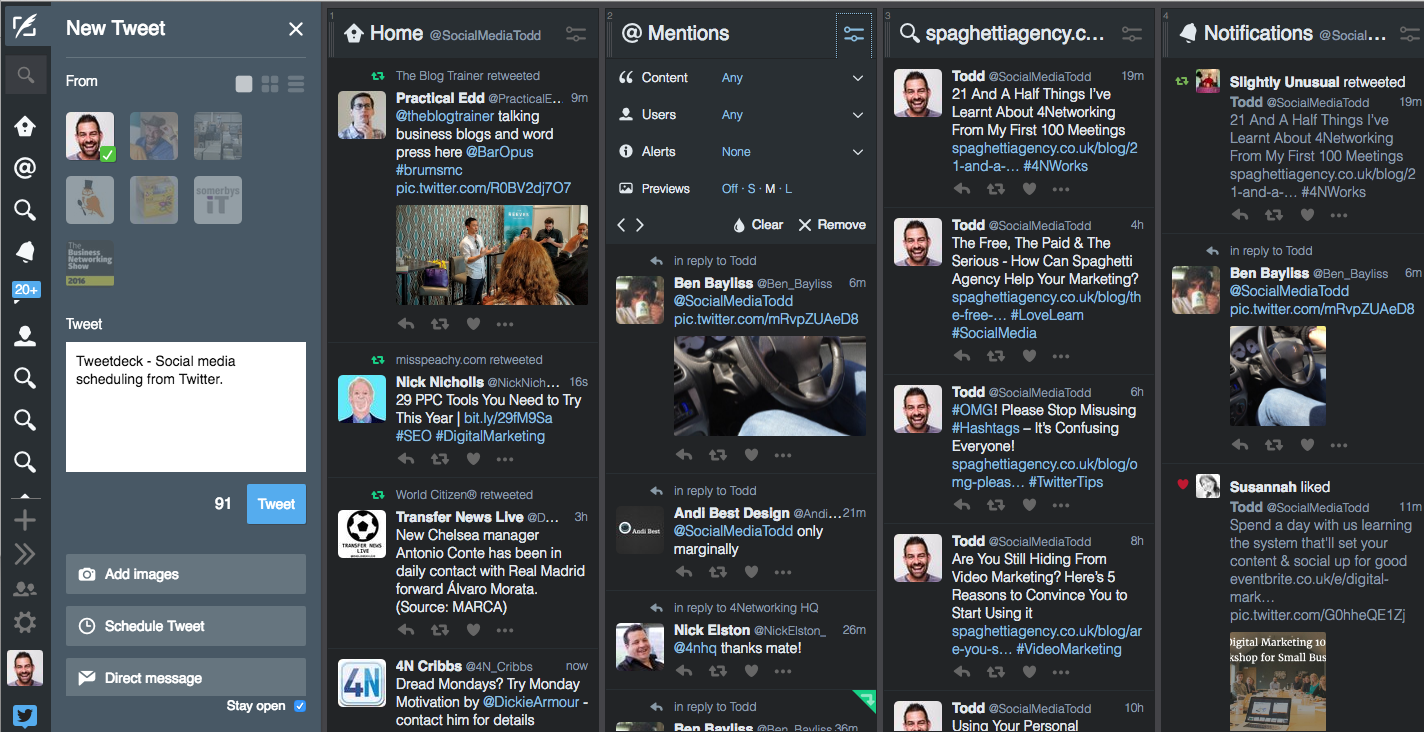 Tweedeck was a great tool. It was created by a third party (not Twitter) and was one of the first tools I used to automate tweets.

Tweetdeck allows you to interact with Twitter and schedule at the same time. It also allows you to have many accounts on your dashboard at once, and as a social media manager this appeals to me.

Tweetdeck’s display is set in columns that you set and organise. It’s the perfect platform for the serial list builder and email folder lover of the world.

Columns can be set for:

The great thing about Tweetdeck is the ability to set your dashboard how you need it. I like to keep saved searches, favourite hashtags, mentions, messages, and GPS location tweets of keywords.

Scheduling tweets on Tweetdeck is really simple. You simply create a tweet and hit ‘schedule tweet’ instead of ‘tweet’ and you’re given a simple calendar to select your time and date.

You can schedule as many as you like (to my knowledge) and it works just fine. Do I use it to schedule my content now? No. (More on that later.)

Twitter bought Tweetdeck in 2011 for £25M and since then it’s not been very well. It breaks and it’s full of bugs and it’s not really moved on since 2011 either. I’m a Mac user and on Mac it’s… well… it’s bloody awful.

The load bearing on Mac from the app is hideous and the beachball of death is always spinning when Tweetdeck is running despite a beefed up RAM. Although the browser version is better (just head to tweetdeck.twitter.com) it’s still very glitchy and not as smooth as anything I’ve used on Mac before.

So Tweetdeck isn’t used as much around here now… although we did love it for the ability to RT good stuff from whichever account you want to use. 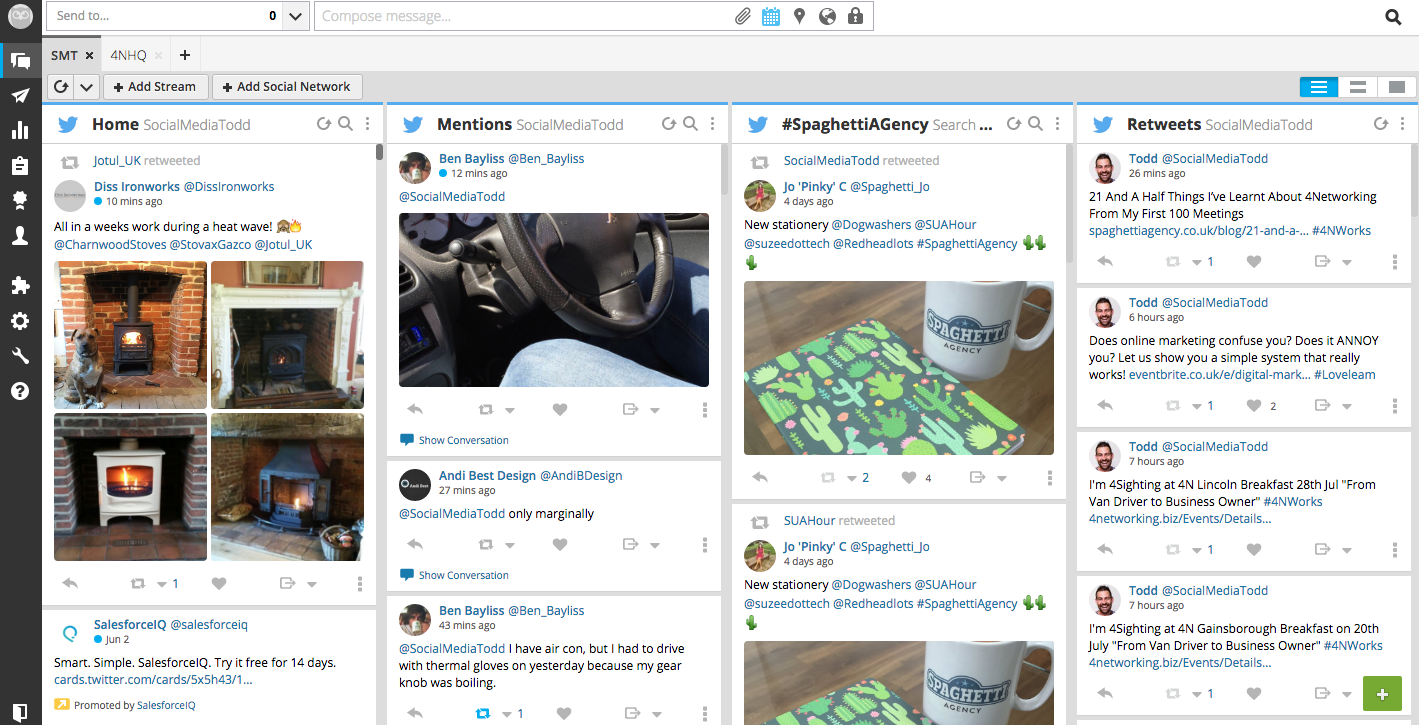 Hootsuite has always been a more serious tool. With Hootsuite University and approved users you get the impression that Hootsuite know what they’re doing.

I was never in the Hootsuite camp when everyone was all “Tweetdeck vs Hootsuite” a bit like when we were all “VHS vs Betamax” or “Playstation vs Xbox”. I preferred Tweetdeck over Hootsuite back in 2012/13.

It used to be very ugly, and the chunky Tweedeck design suited me more. That’s not to say that Hootsuite is a lesser tool. Far from it – it’s way better now than it ever was.

The concept is pretty much the same as Tweetdeck.

Columns (or streams as they’re called) are customisable and completely bespoke to how you want your dashboard – and you get the same options as you do on Tweetdeck.

You can schedule simply on Hootsuite too. The publisher section makes it really easy to see what you’ve got scheduled, much easier than Tweetdeck, which has always hidden the queue of scheduled tweets, viewable only by adding a scheduled tweets column.

The paid version of Hootsuite really gives you the power to be a power scheduler and post 350 updates at one time. With a Pro account you can also have team members and advance analytics which is perfect for agencies.

Does Hootsuite need to take your money?

Well, it depends what you want to do with it. If you’re just scheduling a few tweets a day and don’t want a complicated report, then the free version is fine. Any more than that and it’s a Pro account at a humble £7.99 a month. 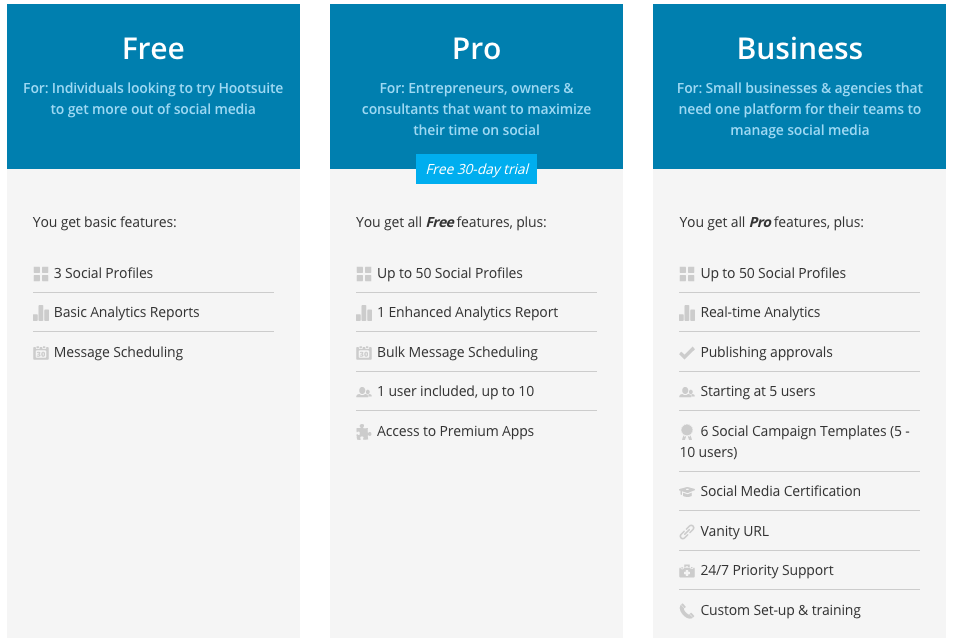 The tastiest feature on Hootsuite Pro is the AutoSchedule which allows you to create tweets and drop them into the schedule to go out at optimum times; saving you the hassle of working them out and setting a time and date like you have to on Tweetdeck.

Hootsuite say: “The autoscheduler uses an algorithm to decide when to post the content based on your optimal engagement time – that is, the time that your followers/friends are most likely to engage with it.”

Hootsuite is a great tool, and if you’re in need of reports and powerful scheduling then it wins over Tweetdeck for sure.

I have found many basic users that use Hootsuite and get confused though. Maybe just because they don’t understand Twitter enough to benefit from the tool, but it’s something I get told a lot. 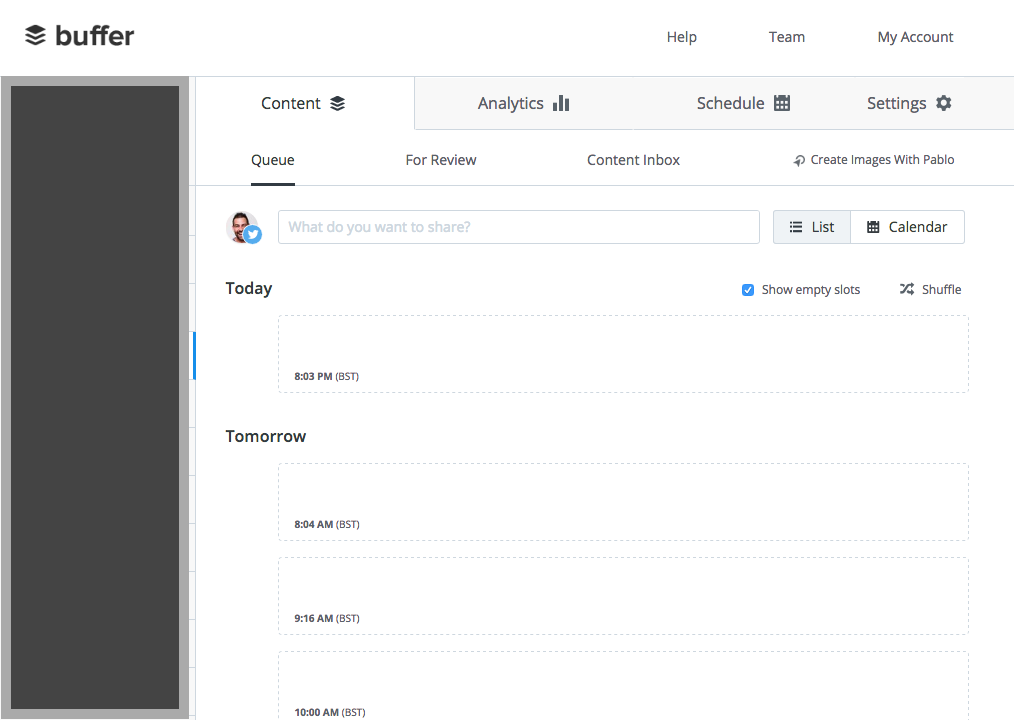 Buffer is my scheduling tool of choice at the moment.

Buffer is all about scheduling content and that’s all it does. And for that it wins for me.

Buffer is all set around a schedule that you set (once) and then add content to your feed and keep topped up. 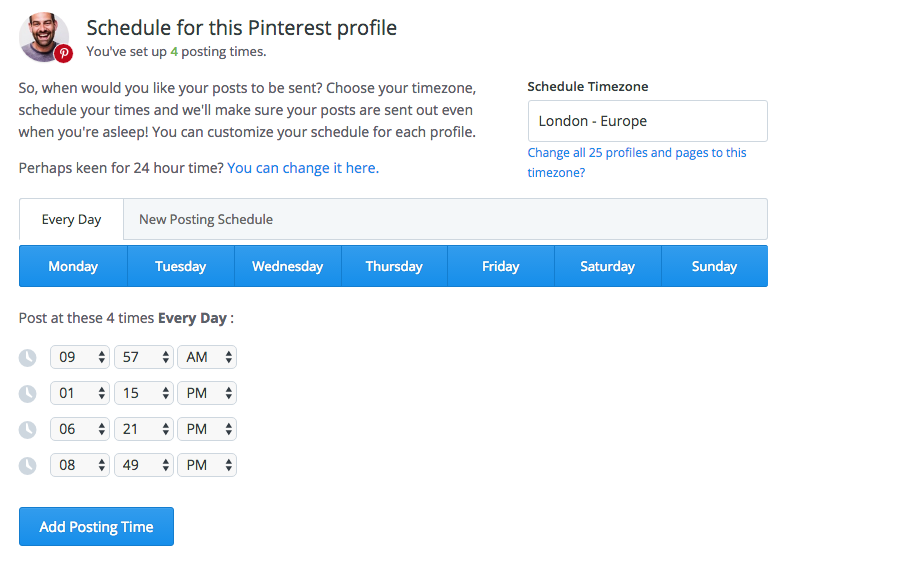 Once you set your schedule up you simply add in content to your queue and Buffer will send out your content at the times you decide, into the slot available.

There’s a great app too (as there is with Hootsuite) that allows you to add content on the go from your mobile browser. The app is great for adding content on the go or when you see the perfect share that you want to add to your Buffer queue.

The app also alerts you when your queue is empty and allows you to re-buffer content; sharing old tweets again.

You do get some reporting features on Buffer. Although they’re nowhere near as good as Hootsuite, small businesses just looking to check their progress can use it. The Buffer reports on the free service are just fine and offer a per tweet analytics feature rather than a full report run-off.

My advice would be to go for the Awesome Plan on Buffer which gives you more than enough content scheduling and all the reports and apps you’ll need. You can connect one profile for each social account, and you can schedule 10 posts per account on the free version. The Awesome plan allows you to schedule 200 posts per month which gives you a lot more flexibility. 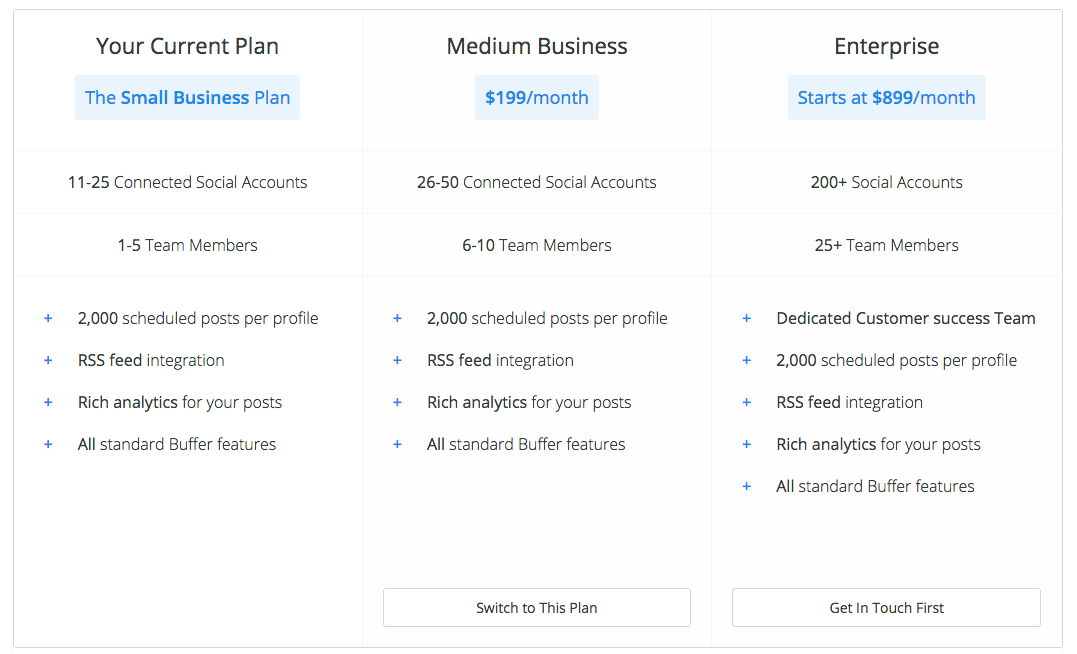 So why is Buffer my favourite when it offers less for more money…?

Buffer just does scheduling more simply. It’s a scheduling tool that doesn’t try to be too complicated and it’s growing all the time. The simple schedule and queue combination make it really simple to see where you’re at, and the app just does it for me.

Both myself and Jo use Twitter on our iPhones. We always have. If we did monitor Twitter on the desktop then Tweetdeck and Hootsuite would have a serious advantage over Buffer – but this blog is all about scheduling not interacting. 😉

One other feature that Buffer has is the browser extension that lets you Buffer content directly from your browser. Again, Hootsuite offer this too but I prefer the Buffer interface overall so it’s Buffer that stays on my Chrome browser.

Its clean and simple interface just seems more “small business-friendly” then the agency-style Hootsuite. And they chat to us on Twitter and ask us for our opinions. What’s more, they actually use our feedback to make improvements to the software.

Buffer works perfectly in our agency, so give it a go!

NB: After writing this blog I have fallen back into love with Tweetdeck. As a simple ‘keeping an eye on Twitter’ tool it’s pretty cool. I just wish the load wasn’t so bad on Mac.

Interestingly Twitter did post a video about Tweetdeck recently pointing to rumours that they’re spending money on it. We hope so. Watch this space!

Filter noise into knowledge with @TweetDeck.https://t.co/Jhk0PemFOR

What do you think…?

What’s your favourite scheduling tool for Twitter? Add your thoughts in the comments below.

8 comments on this article