I didn't receive the Roundup. The Roundup comes on Friday. Therefore it can't be Friday.

No digital round-up this week?! My breakfast just wasn't the same without it :(

It's the only way to start your weekend and end the week! Miss it, miss out!

Networking: Making the Most of NOT Working

Business networking is a core part of many successful small and medium businesses and it’s certainly been a seriously important part of ours but for years. But do you ever sit back at your desk and think, ‘That was a waste of time… Literally.’?

Networking involves you leaving your office or work space, meeting people you may or may not know, eating food with them, getting less than a minute to tell the room what you do and then spending the rest of the time swapping cards, listening to others, and hoping that someone picks up a leaflet, reads your banner, replies to your sales pitch, or walks up and asks to buy everything you have!

I mean… you’re not working. You’re out talking to people and that all seems a little daft when you have work to do, quotes to send, emails to reply to, bills to pay, content to write, and of course social media to be present on.

It’s not working, this networking thing.

But networking HAS given us so much and we can account for so much value, leads, connections, and cold harsh cash thanks to business networking, so I was wrong to push it back for so long.

It’s not a case of rocking up and sucking the leads from the edge like the pet fish I had once that did a very good job of cleaning up the glass of the tank.

You’ve got to be a part of that network, helping people in that room, and you must – you really must – follow-up!

There’s a lot of confusion about networking and a lot of folk who belittle it and say it’s a waste of time, it’s notworking and that really… you’re better off working instead.

That was me years ago. Now I’m a community leader for 4Networking, and someone who’s had plenty of successes from attending and running networking meetings.

I want to help you if you’d like success from networking, too.

I’m going to share exactly what I do at networking meetings.

I’m going to share how we use networking and how we make money from it and also how we learn and grow from it. 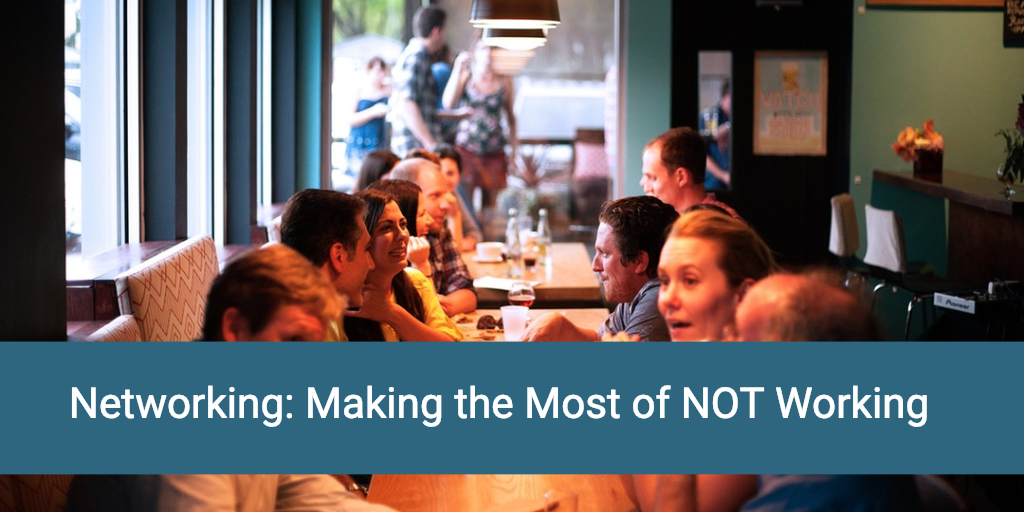 Networking: Making the Most of NOT Working

Years ago, I would limit the amount of events I went to and thankfully for me I found one with wine and that kept me going back. The sheer act of showing up is often enough to get the business.

You can build rapport all you like during the first meeting but I find that it takes many meetings to be seen, trusted, and then be there at the exact time they need you or your services.

So many times I have been in the position at networking meeting where someone who’s connected with me on Facebook, LinkedIn, iMessage, Messenger, and email walks up to me in a meeting and asks for ‘a chat’ about how we can help them.

You’ve got to be in the room and in this digital age you can’t deny the power of physically being there. You’re then better than the most powerful Facebook Ad, the most clickable LinkedIn post, the best text, email, or call they’ve had all day – because you stand out!

I’m pretty much the loud kid at the back just like I was in school. This is only based on my own experience, but being loud, having banter, speaking up, being the example in the talk or even standing up and taking photos when no one else does gets me and my businesses noticed.

I share this because it’s worked for me. It might not suit you, but it very much suits the 15-year-old me who used a bit of wit and some daring comments to attract attention. You’re there to market yourself, not blend in after all. If people don’t like your bold personality or banter then perhaps they’re not the right clients for you anyway.

This continues the above point. An event can have 10s or 100s of people at it and even at a show with 10s of 1000s you can still stand out. When we go to businesses shows I’ll wear my signature cowboy hat and walk around the show saying hi to people and having a friendly chat.

We get noticed, we get conversations started, we get business. Shying away isn’t what networking is about and if you’re the type that sits at the back and waits then you could be waiting a long time to really get anything from networking. Or you could find that you also attract similarly quiet people and you get on with them really well.

You don’t have to be as loud and annoying as people might find me! But you do need to engage and be noticed and for me that means being at the centre of an event, being the volunteer on stage, being that heckler that makes folks laugh and yes – being the cowboy that walked around the show saying ‘howdy’!

I like to use social media in between networking to connect, comment, and add value to the lives of the people I’ve met. I’m try to adding useful content to social media (maybe you found this blog there) and I know that the more people I meet, the more I connect with and the more who read my stuff!

Use social to continue the conversation.

FFS follow-up. There is no point in notworking if you’re going to expect the business to happen in the room and then spare no time afterwards to email, call, connect, tap, like, or comment. You must follow up that conversation or try to start it. It doesn’t have to be all about sales. It could be linking them up with someone you know or met elsewhere, but you must talk after the event, and you must plan in time to do so.

When we exhibit we have a day afterwards blocked to follow-up (properly) for this very reason. We don’t want to be the copy + paste merchants who dump a PDF in your box. We want a personalised conversation that leads to something good. We make notes when we meet and chat to people so we know what we discussed and we like to send something helpful if we can.

Jo and I have both run networking events. I’ve had a very successful 4Networking group and a local tweetup back in the day and Jo runs one of the most popular ladies’ events in her network.

The result? More business because we get more touch points, more exposure, more shows, more conversations and I suspect because we’ve earned more respect, kudos, and authority which are all essential to sales! People get to know us and hopefully like us.

Run the thing if you can or at least be part of a networking group. Or why not – as we did back in 2012 – start your own? There’s a real thirst for it and you’ll gain some great connections!

Speaking publicly at events might be more scary than death to a lot of people, but both Jo and I (and countless others that we know) get great leads and sales because we speak. Adding value through speaking gigs at events gives you the best platform to sell your stuff without selling it and of course it generates you a lot of respect and kudos once more.

In 2018 I spent the majority of my time at 4Networking attending only events I was speaking at and it worked. Combined with other areas or our marketing, our business grew. Snobby? Yes, a bit. Did we get more awareness? Absolutely!

Go back to events. Go back to leads. Go back to your 121s. Go back over and over again and chat with those people. It’s always when you’re an active member of the community that you see success and rarely – although it does happen – when you go for the first time.

Most (if not all) of our paid content, talks, workshops, and marketing have been inspired by people we’ve chatted to at networking events of some kind.

There is no doubt in my mind that the talks, meetings, and conversations that we’ve had at networking meetings has made Spaghetti Agency what it is today. The people we work with, the content we create, and the products and services we now have, have been driven and directed in some part by the people and businesses around us!

Go to these events to notwork but to listen and learn.

I love the talks at these events for that reason and we learn from others what they think we do and then what they want us to do. It’s a fascinating place to be and to share and develop your business.

Notworking: time away from the desk well spent

For years I ridiculed people who went to shake hands with others and told myself and others it was just a way to escape work but I’ve spun 180 on it now! Now I’m adding notworking to my marketing funnels, workshops, and content as it’s been one of the cornerstones of our growth.

Notworking helps you to have more to work on and I hope you do more in 2019 and beyond!

Not sure where to start?

Check out Jo’s blogs on networking for newbies, and if you’re local to Warwickshire check out these events you could try.

Or ask me and I can arrange you to be invited to your nearest 4N meeting.

We look forward to meeting you soon.