Social Media: The Communication Superhighway Or The Route To Anti-Social Behaviour?

This week we had James McSharry (aged 16) in the Spaghetti office on work experience from Warwick School. James has been working behind the scenes doing some admin and working on the back end of websites as well as attending meetings and networking events. We’ve really enjoyed having him here and he’s only made three cups of tea in a week!

Last week we had a guest post from Pippa. Pippa was asked “What does social media mean to you” and you can read what she said here. The result was an inspiring blog that resonated with many readers.

This week we decided to do it all over again to get a different angle.

So James, over to you. What does social media mean to you? 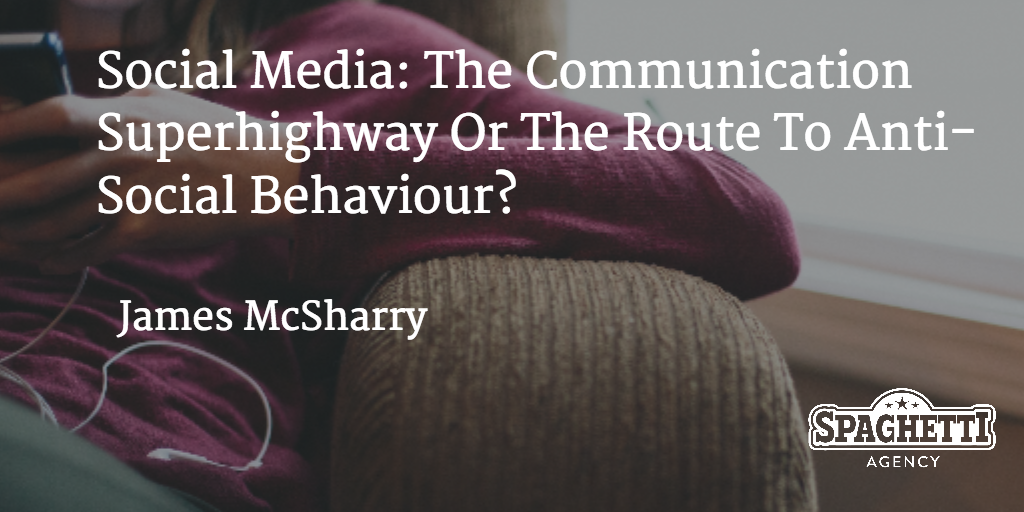 Social Media: The Communication Superhighway Or The Route To Anti-Social Behaviour?

I believe that social media is the single most important platform that I have at my disposal as a young person.

Social media facilitates my following the latest trends, discovering new things, planning my calendar and, more obviously, contacting my friends from wherever they, or I, may be.

Viewing notifications is what I wake up to, and checking live feeds is what I go to bed to; social media is my alpha and omega.

To many, however, this seemingly addictive, invasive and even monopolising form of entertainment is being viewed as a negative, regressive medium, driving us all into a state of habitual isolation from an early age. Namely my parents, but more generally adults who I may be using social media in front of, hold the opinion that removing myself from a real life situation to the seclusion of my phone, regardless what for, is reductive to my level of socialness: it is even rude.

I find the distinct contrast between the opinions of those who grew up with this phenomenon, and those who didn’t (this, I am aware, is a rather sweeping generalisation) fascinating.

When Todd asked me to consider ‘What social media means to me’, it started me thinking about my views in opposition to those of my family, and why it is that they are so different. In summation, I have arrived at a question that I would like to find an answer to by the end of this post:

Firstly, I shall consider why it must be that ‘older people’, or more accurately those detached from the online communities that I have access to, hold their opinions. In order for me to do this, I have asked my dad, a firm believer that social media has grown ‘too big for its boots’, a few questions:

Firstly, do you believe that social media’s grasp over us has gone too far?

Yes, without a doubt.

Can you give me, on a scale from 0-10, 10 being the highest, an indication as to how intrusive social media is on your life personally?

So how do you avoid it?

Honestly I just don’t subscribe to any of the forms of social media. I have a Facebook account, but can’t remember the last time I checked it; similarly with LinkedIn. I never use ‘WhatsUpp’ [sic], snapchat, or any of the other plethora of applications that my kids have.

Do you think that young people in general use social media detrimentally?

Yes and no.  Yes in the context of a family social setting, taking you kids as an example, because even your siblings don’t feature in your social circles, and you’re all using it at the same time, in each other’s company, but totally independently.

I would say that you are all in your own personal bubbles that we as parents are restricted from when you interact with social media; this can never be a good thing surely?

However from the context of you and your friends, I assume that social media is in no way inhibiting to you, and is a fantastic means of communication. After all, I’m sure all of you are on it.

Can you identify a turning point for where you believe that social media and online connectivity shifted from being a positive thing, to a negative one, or have you always been opposed to the idea?

There was no moment where I realised ‘oh wow, this has gone too far’.  It became more apparent to me in recent years just how disconnected I am , because of the many official social media accounts, such as the local Warwickshire police force  ( @WarksPolice )and even the prime minister(  @David_Cameron ), that are now on Twitter.

Do you think it’s a bad idea for such influential, powerful people to use Twitter?

No. However, the amount that they do use it does appear to exclude those who don’t, to the point where the same information is not available through other channels. When I think about it, I suppose I am actually missing out on a lot by not subscribing to Twitter and other networks, which I think is wrong.

I do not want to be forced to use them just to stay informed. I have no issue with, let’s say Twitter, but I do have an issue with the fact that, in order to hear all about my community and other things, I need to subscribe to this invasive form of contact.

Are we being forced to use social media for fear of missing out?

From my own experiences, I have seen that many others hold similar views. Therefore it becomes possible to use this interview as a sort of snapshot for the opposition to social media.

There seem to be a few key points to draw out from these answers:

Firstly, I do agree with the idea that we are slowly being forced into submission by social media. With even the Queen having sent her first tweet a while back (below), it seems hard to deny that, by avoiding involvement with Twitter in particular,  the amount of relevant, important information readily available to us is being limited. (Yes, we’re able to see most tweets through Google, but we are at an instant disadvantage should we decide not to create accounts for any reason.)

Continuing, his opinions don’t seem, as I thought they would have, to stem from young people’s spending excessive time using social media. The issue is the exclusion that people in the room experience.

Our attention and time is being spent messaging, among other things, with people who aren’t physically there. This creates a sense of disregard for any present company we may have, which makes sense to come across as rude. There does appear to be an easy solution: turn the phone off, right?

I don’t necessarily agree with the suggestion that simply turning off a phone or tablet resolves our failure to acknowledge people. Should we be half way through a conversation with a friend online, and we are made to turn off any technology to join a family meal, or partake in a meeting or talk to the cashier, then where is the difference?

We are still ignoring one party in favour of the other, which wouldn’t have been possible if not for social media.

This is a completely counter-intuitive concept, I agree, because even I must admit that there are very few situations whereby ignoring somebody online is comparable to ignoring someone in real life. I hold the same position on this issue as, I assume, you do.

However I find myself struggling to put a finger on the difference in terms of what is actually happening; in both circumstances, a person is reaching out and making contact with us. Why do we so highly prioritise one method of contact (i.e the face-to-face contact) by which a person does this?

To try and understand this, I did some research on texting etiquette

As it turns out, there are a whole host of blog posts about the ‘dos and don’ts’ of texting. The list of The Top Ten Rules Of Texting Etiquette , although a very casual, comic version of ‘rules’, does give an indication as to just how real the expectations of others are in a two way conversation.

I would even go as far as to say that there is as specific of a set of rules for messaging as there is for conversing orally. This, therefore, just puts me into even muddier waters, as I know that it is still just plain wrong to assume that the two forms are not dissimilar.

I repeat myself, then, in asking where to draw out the distinction? This is where I would love some feedback in the comments, as this is something that everyone will have experienced in the past, and any input would be enlightening.

In order to arrive full circle, back to the title of this post, I must collect my thoughts into a conclusion

I do believe that this situation, no matter how rare, of prioritising our attention on certain people can be placed solely on social media. This wonderful, innovative and trailblazing medium, as useful and constructive as it can be, is always going to put people in a position where they must dedicate certain portions of their attention to people.

For the most part, social media serves its purpose flawlessly. However for the rest of the time, it makes no sense but to accept that, yes, in reality, we are all being taken on this whirlwind revolution powered by ‘unsocial-media’.

I would love any feedback on this is the comments below because I really would like to further explore this issue of differentiation with people.

Yes, I am fully aware that the statement I am putting forward in claiming that these two ideas are one and the same is ridiculous – I would just like to understand people’s reasons for why that they think that this is the case.