As I settled into the workshop and was getting to know the delegates, I was very aware of the varying levels of expertise and understanding in the room.

I really enjoy the range of people and businesses we get at our workshops. The challenge is always keeping it relevant for everyone.

We went around the room doing so everyone could introduce themselves, and then we got into the content of the workshop and I dealt with questions as we went. I much prefer this method of training, and always have done.

And then it happened! The question that always gets asked got asked.

“But Todd, isn’t that a lot of content to share? Doesn’t posting it more than once and on more than one platform…. ANNOY YOUR FOLLOWERS?”

And there it is. The single biggest reason I believe that you’re not creating enough content.

We all deal with fear in all manner of places in our lives, for all types of reasons.

Fear certainly holds us back.

But the fear of annoying people, because you don’t want to be someone who posts too much, is a real fear that stops progress. 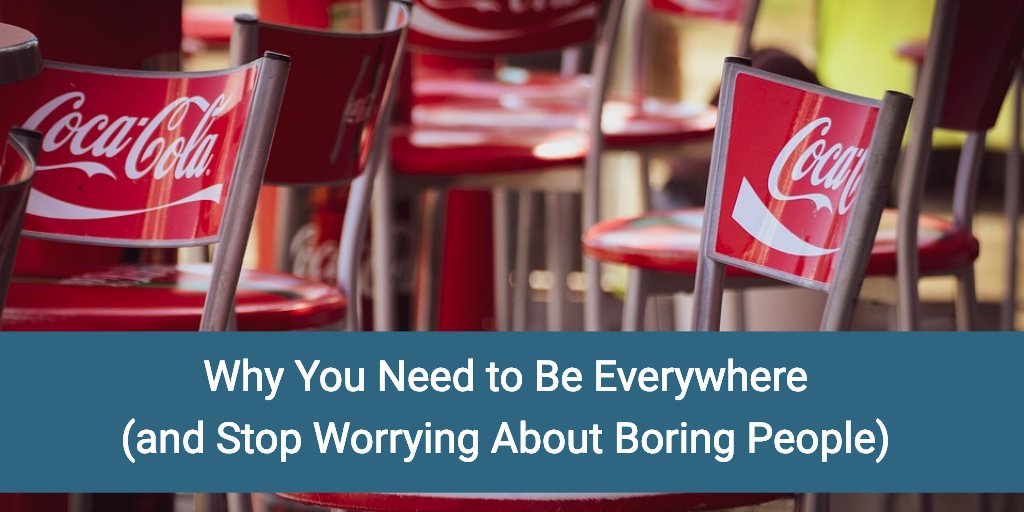 But… you can never have too much water (almost)

Water is great for you. In fact – it’s essential. Water is powerful, it’s a life fuel, it’s what the majority of your brain, body, and the globe is made from!

You can almost never have too much off it.

The problem I see (and here) is that “Linda just shares so much crap on Facebook” and I get that. I get it 100%.

We all have a Linda on our timeline. She/he is the person who shares, posts, and updates social media with tripe, quite frankly.

It’s scrollable and useless. No one wants to emulate that.

But in your marketing, you need to share more value, more content, on more channels, more of the time.

And you need to get over that fear of being ‘Linda’.

The problem with ‘under’ sharing

Over-sharing (crap content) is a real turn off and I know you don’t want to be that person.

Checking into hospital as a way to gather sympathy might not be what you’re into, and taking selfies in every gym and then posting your breakfast is unlikely to be your bag either.

In the world we all live in, the internet, social media, emails, blogs and videos are so cheap to create and share (often free) that there’s more content out there than you could ever read.

And that means your one blog a month, your few posts on Facebook, and your occasional email aren’t going to cut through the noise.

… and then you need to share the SHIT out of it!

How do you stand out on the tube?

I was in London recently for an expo and on the way home I made the mistake of getting onto the tube on rush hour!

“Don’t even look them in the eye,” she jested.

But I was already standing out in a crowded place.

Standing out is easy… because far too many are working hard to blend in.

Your content needs a bigger chance to shine now and you’re very unlikely to ever be like Linda.

Your content has a very low chance of ever being seen let alone clicked on or through to thanks to bulging timelines and over-zealous algorithms.

So you gotta ignore the fear of being like Linda. Her personal Facebook posts get through to you because you’re constantly reading them – but that’s not for now.

You gotta put out more!

The fact is, not all your followers are on all your channels – few very are on two of them – so they WON’T be overwhelmed.

And if they see you too much? That’s actually a GOOD thing!

What Tom Cruise knows about touch points in marketing

Do you think Tom Cruise worries about over promoting his latest movie?

Do you think he says to his agency, “Can we just do one talk show and run a few YouTube ads? I don’t want to annoy my fans”.

He’ll use every channel going and here’s what you can learn about marketing from Tom.

The core message is the same

Let’s face it, most of the ads and interviews he’ll do will have a theme – the movie. He’ll always come onto that after the interviewer tries to get some insider information on him.

But the core stays the same

TOM TIP: Create your movie theme, then use it as the core for all your content one week/fortnight/month and then tweak/update/repurpose for each channel.

When Tom promotes on YouTube it’s a full on 30 second blast of the trailer just before a relevant video on YouTube.

When Tom promotes on a TV chat show, he chats, tells stories, and gives some behind the scenes gossip.

When Tom goes on the radio, he’ll have an agenda of what to discuss and the radio show will have this to work to.

TOM TIP: share the same message out there but apply and mould it to the channel you’re sharing it on.

And Tom doesn’t bottle it early. We’re certain HE gets sick of promoting his content, but he knows that to get that movie’s first weekend rocking and get the press and charts talking about him, he has to keep going.

Tom knows that loads of people still haven’t heard about his movie or they’ve seen clips, seen busses with him on the side and not had time to focus on it yet. He keeps going until they do.

Tom knows his isn’t the only movie coming out.

Tom also knows that we’re inundated with noise and that he needs to build up those touch points.

Even if you’ve seen sometime two or three times, you may not have even clicked, watched, opened, or paid any attention to it.

Why do you think Coca-Cola still advertise?

I’ve never had that call…

I tell you what I have had though…

Under the posts of workshops, events, networking, and other products that are time sensitive

“How have I not seen this already? I can’t make Thursday. When’s the next one?”

And every time it reminds me: “I let Linda shut me up!”

I feared the call I’ve never had!

OK here’s the balance: The fact is, you’ll annoy some people and it would be unfair of me not to mention this

Once I was told about a conversation from three people at a networking even complaining we’d emailed too much that week so they’d unsubscribed. (We sent three emails instead of the usual one.)

Perfect. Three people who are not my customer eliminated themselves and they did it quietly… (Apart from someone I know overhearing them.) That’s absolutely fine.

Be great, be brave, be bold, be consistent, be loud, be everywhere!

Don’t fear the call you’ll never have, don’t hold back on the awesome content you can share, and don’t run events (as we have in the past) that are under-subscribed and half-booked because you forgot that even Tom Cruise has to work hard.

Can you share too much? Probably, but if your content is as good as water, then let the odd person get soaked!